Plays Well with Others 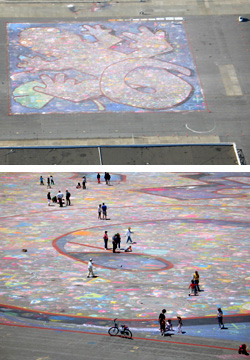 Anything can happen when creative types cross-pollinate.

In June 2008, visual artist Mark Wagner and 6,000 other collaborators—most of them children attending Alameda elementary schools—covered 90,000 square feet of asphalt with colorful chalk. Sketched onto the surface of a runway at the defunct Alameda Navy base, the collective masterpiece depicted an enormous stylized image of an intertwined fire salamander and a ginko leaf. It also set a new Guinness World Record for largest pavement art.

Although Wagner conceived the project, which was preserved for posterity via satellite photographs, he could never have executed it by himself—and anyway, a solo piece would have been beside the point. “That’s collaboration,” he says of the intense and interactive two-week endeavor. Cue the Beatles song, “With a Little Help from My Friends.”

Creatively oriented types—artists, writers, musicians, dancers, and others—are finding frequent opportunities to collaborate these days, perhaps due to the down economy. Grant money is hard to find and solo studio space is expensive, but numerous galleries and centers offer opportunities for folks to put their paintbrushes together and create. Group murals or events such as Oakland’s Art Murmur engage many talents toward a single goal—perhaps to beautify a neighborhood, perhaps to raise awareness of the arts. Most important, collaboration is just plain fun, say those who regularly work with others.

“I love just getting outside of my own story,” says Terri Saul, 40, a visual artist who lives on the Oakland-Berkeley border and teams up with poet Carol Dorf to create projects that they have presented at Mythos Fine Art and Artifacts in Berkeley and other venues. 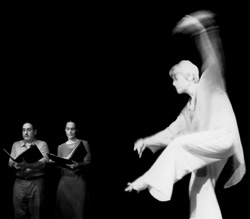 Two (or three) to tango: Lucinda Weaver (right), Alan Bern (left), and Barbara Villanova perform “Three Trees: A Haiku Walk,” a collaborative piece based on poems by Bern that were translated into Italian and Spanish by Villanova and choreographed by Weaver. Photo by Marion Patterson.

“Collaboration is getting away from autobiography, the self; it’s coming up against someone else’s story,” says Saul, who supports herself and her teenage daughter as production editor at Parallax Press in Berkeley. The practice requires, she says, “getting out of your own ego, learning to dance in someone else’s shoes.”

But first things first. “I really love her [Saul’s] art and I think she really likes my poetry,” says Dorf, the poetry editor of Talking Writing magazine and a Berkeley public school teacher. “That helps us work together.”

Eric Kos of Alameda, 38, a graphic artist and publisher at Stellar Media Group, spends evenings and weekends with other artists restoring vintage pinball machines at the Pacific Pinball Museum in Alameda. Together, the volunteers create large-scale murals of classic pinball back-glass (the background on each machine). Restoring the machines also requires the joint volunteer efforts of electricians, engineers, and photographers, Kos says. 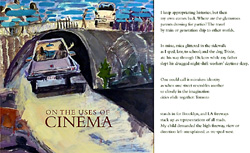 “In today’s economy, artists are coming together at so many different venues,” says Kos, a graduate of the Rhode Island School of Design who describes collaboration as “a bunch of individuals with a creative bent” who unite “to perpetuate their creative urges.”

Today, as always, most artists support themselves through day jobs, so making a profit from their creative work—an iffy proposition at the best of times—is seldom a serious goal. If nothing else, the extreme unlikelihood of benefiting financially from their joint endeavors frees up creative partners to pursue their most whimsical inspirations.

Not everyone, though, is suited for collaboration. Words like “ego” and “control” tend to come up when artists describe colleagues who only work alone—or make others wish they would. “People who are very controlling, dogmatic—or on the other hand, who are too vague—are difficult to work with,” says musician Dan Plonsey, who also teaches math at Berkeley High School.

Robert Woods (left) and Alan Bern working on the Crow letterpress print above. The life-long friends collaborate on many letterpress prints encompassing words and imagese—or, as the name of their two-man press artfully suggests, Lines and Faces. See more of their work at linesandfaces.com. Photo by Jean Woods.

“So are people who are either too focused on time and money—or totally oblivious to time and money issues,” Plonsey continues. A prolific composer and clarinetist, he is known for his experiments with the ever-changing roster of musicians that make up his avant-garde jazz group, Daniel Popsicle. The recipient of a United States Artists Fellowship in 2009, he teamed up that year with (now deceased) graphic novelist Harvey Pekar to produce Leave Me Alone, a jazz opera about how ordinary people should support experimental art—particularly avant-garde jazz.

The collaborative process is like a complex piece of music, says artist Saul, and flexibility is key. “You may not be the melody,” she says. “Maybe you’re the bass line or the rhythm.”

“Each is not necessarily better than the other,” agrees Kos. “In some cases I’m just the oarsman, but sometimes I’m the lieutenant. I’m always willing to fill in the gap to be filled, because I’m a collaborator.”

Pleasant Hill sculptor and engraving artist Robert Woods, 61, tells the story of a group mural he worked on with a group of U.C. Santa Barbara students. Most of the students were available to paint on the wall during the week and were inspired by each other’s give and take; the mural progressed and bloomed accordingly. One student, though, could come only on the weekend, so he worked alone. Finding himself unable to connect with what the other artists were doing, he eventually covered their work with his own, and the mural project died on the wall.

“Successful collaboration involves some kind of surrender,” Woods says. “At some point you give up your notions, part of your process, to enlarge the world of the work and dovetail with somebody else.”

Woods’s creative partner is his lifelong friend, poet Alan Bern (author of two collections, Waterwalking in Berkeley and No no the saddest), who also works as a children’s librarian at the Berkeley Public Library. Together, the pair, who met as students at Garfield Junior High School (now King Middle School) in Berkeley, designs letterpress prints encompassing words and images—or, as the name of their two-man press artfully suggests, Lines and Faces.

Interacting as artists, says Woods, “[gives] you a larger world than the creative process would give you working alone.”

Another friend from the collaborators’ Berkeley youth is professional dancer Lucinda Weaver. Using lyric poetry that Bern has written, Weaver and Bern, who call their ensemble PACES, perform arrangements of his words and her moves at venues around the world, from Italy’s Poetry on the Lake festival in Orta San Giulio to concerts at Cragmont Rock Park in Berkeley. Whatever the venue, Bern says, he and Weaver create something particular to that place and time. “The space is a design element,” he explains. “We embody the space, make performance pieces within the space.”

Collaboration between artists takes many forms, including the sort of simultaneous brainstorming (“Wait, wait—let’s superimpose that red fish on the juggler’s forehead!”) that the term tends to conjure up. The crux of this large and amorphous concept, though, is simply that each participant contributes to the whole. Sometimes collaborators integrate their styles; other times, each contributor’s work is clearly distinguished from the other’s.

A well-known example of the latter: Exquisite Corpse, the parlor game invented by surrealist artists, in which each of several artists draws a portion of a figure or writes a line of poetry without seeing what the others have done. Fantastical, nonsensical, or amusing, the result showcases each person’s contribution and yet is more than the sum of the parts.

Then there’s the classic approach known as ekphrasis (from the Greek word for “description”), where one participant describes, reacts to, or illuminates the other’s work. For example, a writer might visit a museum and create a word sketch based on a painting or sculpture that intrigues him. Poet Dorf and artist Saul often collaborate ekphrastically, bouncing off of each other’s work (the method works well for those with complicated schedules, since both—or all—partners need not work in the same place at the same time). The process allows for flexibility, too. Once, Saul drew and painted in response to several of Dorf’s poems that inspired her, but in the end found herself “almost obsessed” with a single poem titled “The Theory-Headed Dragon,” and created several pieces of art based on it.

But for every tried-and-true form of collaboration, there are a dozen experimental approaches. Most recently, for example, Saul and Dorf worked in the same room at the same time to create a piece composed of Post-It notes, each of which contained a tiny sketch or a single line of poetry. Together, they kept moving around the components until the arrangement suited them both. “It was a very process-oriented piece,” Saul says. “Not very beautiful. It doesn’t reproduce well.” But, she says, she loves “the way the short poetry lines interact with the little doodles.”

“Being an artist by oneself, working in the studio for hours and hours—that’s why I even got a dog and had kids, so I could drag them down to the studio,” says Wagner, the mind behind the Guinness World Record project in Alameda. He’s joking about the dog and kids, but not about collaboration, which he describes as “something that fed my soul better.”

“The energy around it was very attractive,” he continues. “The level of joy of getting together and creating something is really cool. The artist is out of the studio, on the street, working live.” Wagner took that idea to an extreme when he orchestrated the giant chalk drawing. Through storytelling at the several elementary schools that participated in the project, he primed the pump, engaging the children’s imaginations and preparing them to draw.

He also encouraged parents to join the process. “Parents have lost touch with their own innate creativity,” Wagner says. “Kids are naturally creative, and most of them are naturally collaborative. As you get older you get more fixed and don’t think you have access to that.”

Wagner says that interaction changes his work in intriguing ways. “You acquire information along the way that gives you direction. If you’re not locked into where [the artwork is] going, then it’s more organic, more interesting, more mysterious. Instead of me just imposing my will on it, it meets me halfway.”

“Your process keeps getting interrupted,” says Saul, describing what’s both the main point of collaboration and its greatest challenge. But thanks to a lifetime of hands-on mentoring by her mother, the artist Suzanne Saul, “I was used to someone else’s art on the page,” she says. That means the kind of technical concessions that collaboration requires don’t faze her. For example, on some projects, Saul has to remember to “leave holes—air or space—in the work so that [partner Dorf] can write into the drawing.”

In fact, Saul says, the hardest aspect of collaboration has nothing to do with artistic process—it’s simply finding time for creative partners to fit mutual projects into lives already crowded with the demands of families, jobs, and individual art practices. For Dorf, who rises before dawn to write before getting her 15-year-old daughter out the door and herself to work, the challenge is the same—and so is the motivation.

As Lines and Faces poet Alan Bern says of his work with Robert Woods and Lucinda Weaver, “When we feel that we’ve made a piece that’s whole and we see that people get that, it’s very satisfying. Making things together is very powerful.”

——————————————
Julia Park Tracey, a former Monthly editor, chases the Muse on Facebook and at modernmuse.blogspot.com. 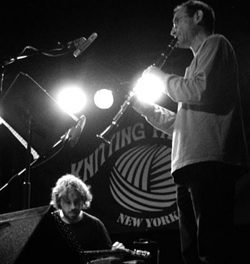 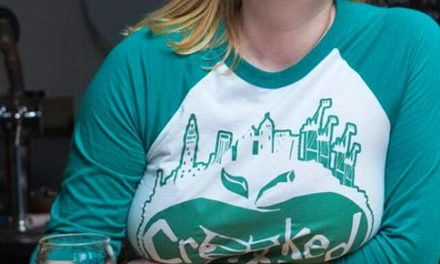 The Origins of Bay Area CiderCon 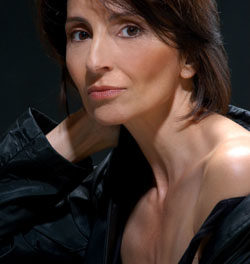