Come Sail Away in Berkeley 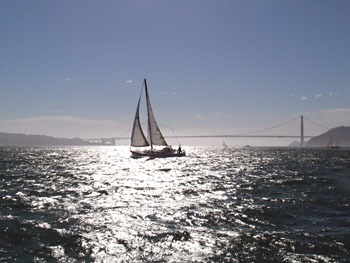 On a windy Wednesday night in August, I meet Anthony Sandberg, the founder of what some say is the best sailing school in North America. Hundreds of boat chimes clang; taut ropes snap against masts and decks at the Berkeley Marina. Although a mass of dark clouds is heading swiftly through the Golden Gate straight toward us, 200 of Anthony’s closest friends, mostly members of the Olympic Circle Sailing Club (OCSC), are smiling and chatting as if it were a sunny afternoon. The plan is to load onto 27 of the sailing club’s company- and member-owned boats, then head straight into the weather for an evening sail.

As a landlubber who isn’t particularly interested in a watery death, I figure we could just call it a night, hang out at the Marina and wait for one of those pink-sky evenings to make our foray onto the Bay. “Anywhere else they’d call this a storm,” Sandberg tells me as he rounds up the OCSC sailors. “Right now it’s probably blowing 25 or 30 knots. Eighteen knots anywhere else in the U.S.—that’s small-craft warnings and it closes the doors. Here, it’s 15 to 18 knots by midday and 25 in the afternoon. I’d be closed 10 months a year.”

Sandberg, a graying, thick-mustached man in his late fifties, has a gritty passion for the San Francisco Bay that turned a shack on the Berkeley Marina (which, when he discovered it in the ’70s, was a dilapidated structure on the edge of a landfill) into one of the largest independent sailing schools in the country. His face always looks like it’s just gotten some wind and sun, and decades of looking into the distance have put creases around his eyes.

Even in 1979 when Sandberg had only a Dodge van (that he lived in) and an idea, he believed the sailing club would be what it is today.

His goal was to build a sailing community that was accessible to all kinds of people, not just rich men. Since its modest inception, the club’s intensive courses have graduated thousands of aspiring sailors, and half of its students are women. Through introductory trips onto the Bay, a full calendar of social events and relationships with organizations such as the YMCA and Cal Sailing, OCSC introduces the sport to thousands more every year.

“Anthony is a classic combination of early adopter and social connector,” says Richard Jepsen, the club’s CEO who has worked with Sandberg since 1980. “He loves new ideas, whether they are new inventions, concepts or activities. He is peppering his friends and colleagues with links to the latest car, the latest Podcast, technology. And, when it comes to sailing, he is the Pied Piper of sailing here at OCSC.”

Among the many subjects about which Sandberg can wax poetic—his travels around the world, Middle Eastern history and culture, environmentalism, the way people defer their dreams—he’s best at getting you to appreciate the San Francisco Bay.

“This is, without a doubt, universally recognized as the best single-location sailing in North America,” Sandberg says. “Then of all the places you could possibly have a school on San Francisco Bay, this very spot is the perfect spot.”

As we prepare to sail into a veritable storm, he explains how the wind blows straight from the Golden Gate to his place in the marina; how it starts lightly in the morning but picks up by the afternoon; how, after a day of sailing, it blows so strongly at your back that you feel like you’re riding home on a sleigh. He marvels that sailors don’t have to motor for a moment to get into the wind; one can sail straight out from the dock. He talks about the depth of the water and shape of the Bay, the tides and currents and waves and seasons.

By the time he walks me over to his wind- and tide-charts, I’m thinking that 35 knots sounds like a pleasant breeze. I’m practically hoisting the sails. But first, there’s socializing to do.

I meet the so-called Usual Suspects, the men and women who make up the core of OCSC. There are people like Larry Ledgerwood, a corporate business counselor/sailing instructor who has sailed all over the world with Sandberg. There’s Jerry Fiddler, a software company founder and U.C. Berkeley business professor, who’s handing around chunks of delicious blue cheese and sourdough. Graham Hale, a renowned U.C. Berkeley physicist who gave up science to teach sailing at OCSC, is likely around, too. So are a dozen other men and women who’ve left behind their day jobs or retired from their decades-long careers to pursue a life of wind and water.

Lastly, there are the newbies like me—a pair of women from Outside magazine scoping out the school, folks who are there to get a taste of the Bay before signing up for lessons, and, somewhat strangely, the entire staff of the Aveda Store on Fourth Street in Berkeley. (I ask Sandberg how he knows the Aveda crew; he says that he liked their store, so he decided to invite them all sailing.)

Suited up in our bright foul-weather gear, we look like rubber duckies about to get tossed into some Class V rapids, and we’re all completely cool with it. The boat I’m on, a $395,000, Caliber 40 owned by one of the club’s members, is made up of both amateurs and pros—the Aveda staff, the women from Outside magazine, three of the Usual Suspects and Sandberg. With Sandberg at the helm, the dozen of us somehow feel like we’re heading into a Mediterranean lagoon, not a wind-swept Bay. (Well, all but a few of the Aveda women who stifle screams as the boat pitches steeply starboard with the wind.)

“When I get on a boat here and we’re out around the breakwater,” Sandberg says, “I’m 16 years old again. The boat’s moving through the water. It’s charging. I’m alive, and all those fetters—I’ve got HR things and insurance and investments, all sorts of stuff—melt away and I’m just a young guy having a great time being out in nature.”

But as much as he likes to see first-time sailors discover the joy of his place on the Bay, Sandberg doesn’t want this to feel like a one-time privilege. This isn’t an anniversary trip to the French Laundry. It’s more like a group of friends leading you to some gorgeous swimming hole in the woods.

“There’s a psychic piece of Plexiglas around the whole Bay where most people feel like they can’t access it,” Sandberg says. “I look at it and it’s like, that’s the playground. The whole Bay Area—hiking in the mountains, going in the Bay, all of it.” Jumping in for a swim (as Sandberg does regularly with the Dolphin Club), sailing or even walking along the shore just isn’t part of day-to-day life for most Bay Area residents.

As we race across the waves, cormorants overhead return home after a day of fishing at the Farallons. A second sea of fog pours toward us across the Bay; the OCSC sailboats account for virtually all the boats on the water. In the couple hours that we spend sailing—a trip that takes us well out toward the Golden Gate, behind Angel Island and north toward Tiburon, then back home to the Berkeley Marina—the only boats we see are a behemoth ferry powering through the waves and one tiny sailboat conducting a man-overboard drill in the stormy weather.

There must be thousands of windows with views pointed right at us, but for that evening, our boats feel strangely alone on the Bay. It’s as if we’ve been invited to one of the most exclusive parties in the world, but, as Sandberg says, “I don’t imagine there’s a better party going on.”

The irony is that it’s really not that hard to get in. To sail with OCSC, all you need is $40 for a Wednesday night sail, a $20 monthly membership to the nonprofit, cooperative Cal Sailing or an invitation from Sandberg (try hanging out in the Aveda store if this is eluding you).

Sandberg wants to bring more people onboard. “I’m just so bewildered that people don’t allow themselves to access nature,” he says. “There’s hardly anybody even walking here! There are 8 million people around the Bay Area. Where are they?”

The sailing club does introduce thousands of unlikely sailors to the water every year. Sandberg is on the advisory board at the YMCA and has created a program called First Wave, which is aimed at third- and fourth-graders. The goal is to get 4,500 local third-graders learning to swim one year and onto sailboats the next year. OCSC also helps support Cal Sailing, which provides open access to sailboats, lessons and activities at affordable rates. In addition, Sandberg simply invites hundreds of Berkeley, Oakland and Richmond middle-school students to sail for free each year.

Sandberg also sees the importance of sailing lightly on the water. The club has an extensive recycling program, uses green cleaning materials and eco-friendly paints on the bottom of boats. He says at least five percent of charter fees from the international sailing trips that OCSC leads goes to environmental and social causes in the communities they visit—saving dolphins in Croatia, turtles in Greece, manatees in Belize.

As those dark clouds finally catch up with our boats, the OCSC flotilla makes its way back toward the marina. With the wind at our backs, we’re absolutely flying across the water. It’s as if we’re riding that wall of fog home. My pores are full of sea-air, my heavy clothes are even heavier, but I feel lighter than when I left.

When I ask Sandberg why he wants to share the Bay with everyone he sees, it’s as if I’ve asked him why he’s chosen his mission in life. Why did he move to a little-known marina nearly 30 years ago and endure living in a van? Why did he build a sailing school next to a garbage dump? It was all because he believed in his spot on the San Francisco Bay, and he wanted to share it.

“You see that boat moving through the water there,” he says, pointing to a sailboat a few hundred yards away. “It leaves a wake and it disappears. You can’t use it up. It’s just wind and water and it’s moving around.”

—————————————
Mike Parker is a freelance writer and a member of the Affinity Team at Geographic Expeditions, a San Francisco-based adventure travel company. After graduating from Kenyon College in 2006, he spent a year driving all over the United States in an enormous bus and writing about it.