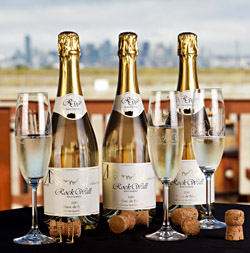 A scintillating look at the perennially popular adult beverage.

“Sparklers used to be only a celebratory thing, served at receptions and maybe for dessert,” says Sean Hubbard, food and beverage director at the Claremont Hotel, home of the annual spring Berkeley Wine Festival. “However, now they’re taking on new roles.”

The undisputed king of sparklers is Champagne, first popularized in the 17th century. Today, a sparkling wine can only be legally called Champagne if it is produced in France’s northeastern Champagne region. Produced elsewhere—like Italy’s Prosecco, Spain’s cava, and California’s blanc de blancs—sparkling wine can only be called sparkling wine. Vintage Champagnes and sparklers are products of a single year; their non-vintage (NV) counterparts are blends of several years, and are typically cheaper.

“It used to be that everyone drank still white wines when they were standing around talking and still red wines with a meal,” Hubbard says. “Nowadays it’s different. Champagne and sparkling wines are having a resurgence and being served not only at all kinds of occasions or at the ends of meals but throughout meals.”

Various methods of production spur the sparkle. In the classic champenoise method, a second fermentation occurs after a dosage—sugar and yeast, usually infused right into the bottle—converts to alcohol and carbon dioxide. Vive le fizz.

At the Claremont’s Meritage Restaurant, sparklers are paired with oysters, flatbreads, salads, and even entrées.

“We serve a citrus salad with frisée greens which are very bitter,” Hubbard says. “This presented a real challenge when it came to still wines. We tried everything from a light sauvignon blanc all the way up to a heavy chardonnay, but no white wine could stand up to that bitterness or break that acidity. But surprise, surprise—a sparkler broke right through.”

“People are taking sparkling wine more and more seriously,” says Alameda winemaker Shauna Rosenblum, whose Rock Wall Wine Company produces sparkling blanc de blancs. “They’re doing different things with it. In fact, they’re doing everything with it. They’re drinking it with food: a light chicken dish, a nice fruit tart—sparkling wine complements it all. But they’re also using it in cocktails, which most people would never do with regular still wine.”

“Compared to still wine, which has existed for 10,000 years or more, sparkling wine is a new drink on the scene,” notes Napa winemaker Eileen Crane, CEO of Domaine Carneros, the Stateside arm of French Champagne maker Taittinger. A key participant in the Berkeley Wine Festival, which runs from March through April, Crane is considered the nation’s top sparkling-wine connoisseur. This summer’s harvest will be her 35th.

“It’s been fun, because I’ve watched the evolution of fine sparkling wine in California. Over the years, the French companies have consistently raised the bar for the rest of us. There are thousands of wineries in California, but only about 10 sparkling-wine houses. It’s a very small club,” Crane says.

Sparklers are, however, among the many varieties of wine turned out hereabouts by Castro Valley’s Chouinard, Sunol’s Little Valley, and Livermore’s La Rochelle, Rios-Lovell, Big White House, Ryhan, and Stony Ridge wineries.

“Why do I make it? Because it’s what I want in my glass,” Crane says.

Grapes destined for sparkling wine are harvested in late August or early September, earlier than the grapes typically used in still wines. The finished product spans the sweet-dry spectrum from doux to demi-sec all the way to brut and ultra-brut.

“Over time, around the world, the preferred style has changed from very sweet to the style the English like, which is very dry,” Crane explains.

The drier the sparkler, the better it pairs with whatever you’re eating.

“I call a good brut the most versatile wine in the world,” Crane says. “There are only two things it doesn’t go with: toothpaste and coffee. It’s the only wine you can do three times a day; four, if you do afternoon tea.

“As much as I like chardonnay, a fine sparkling wine is the perfect match for salads. And I wouldn’t dream of having oysters without sparkling wine. You should take them together in a single breath. With any cheese, especially goat cheese, sparkling wine is sublime. Try a demi-sec with a little biscotti. A classic vintage brut has the body and finish and elegance to balance even heavier dishes. I fell in love many years ago over sparkling wine served with filet mignon.”

Were sparklers made for love? Studies conducted in the laboratory of enology (wine science) at France’s University of Reims Champagne-Ardenne might someday bear this out. Thus far, the lab’s chemists have found that the sparkler’s power is packed in its bubbles, which contain up to 30 times more flavor-enhancing chemicals than the drink’s still portions. The lab has also determined that a sparkler’s bubbles work more effectively in a slender flute than a wide-mouthed glass, and that a standard bottle of Champagne produces tens of millions of bubbles.

“The bubbles in sparkling wine are much smaller than the big bubbles in soda,” Crane says, “so they give you a different sensation, a wonderful creamy tickle that bursts into your mouth with the first sip. A sparkler is going to be a little crisper than any white wine. Swallow it, then look for that wonderful long finish. It lasts and lasts.”

As does sparkling wine itself, Crane adds.

“Some people say that once you open a bottle of sparkling wine, you have to drink the whole thing right away. Well, you don’t. The bubbles act as a preservative, so sparkling wine will actually stay fresh and good in your fridge far longer than any other wine when closed with a proper winger stopper. Have a glass one night, then another the next. Come back for five nights. By the sixth, the bubbles will be a bit softer, but they’ll still be there.”

When Rosenblum offers samples of her Rock Wall sparklers, “I tell people first to look at all the pretty bubbles coming up from the bottom of the flute. Then I say, ‘Stick your nose in there and tell me what you smell.’ Sometimes it’s like yeast or baked apples. We bottle our sparklers very young, so there’s a crisp fruity note and some nice little orangey notes from the muscat. But there’s no special trick to enjoying sparkling wine, no fancy rules.

“I consider sparklers the gateway wine for people who think they don’t like wine. They’ll say, ‘I hate wine.’ And I’ll say, ‘Really? Try this.’ Even if they don’t like a sparkler’s flavor at first—say it’s too dry for them, or too acidic—I’ll add a little dessert wine and they’ll say, ‘This is hella good. This doesn’t taste like wine.’ That’s the fun of it.”

Sparkling wine is a popular accompaniment to the hearty farm-to-fork dishes at Berkeley’s Origen, which opened last fall. Because their menus are inspired by Catalonian cuisine, chefs and co-owners Daniel Clayton and Trace Leighton favor the sparkling wines known as cavas, produced near Barcelona and enjoyed by the Spanish royal family since the 19th century.

“A vintage cava, like any vintage sparkling wine, has those nutty caramel notes that give it the greatest capacity to pair  with food,” Clayton explains. “But the sourcing of aged wines becomes a cost issue, because your average diner is not going to want to spend $80 on a bottle of sparkling wine. So at Origen, we focus on approachability.

“Younger sparklers might not pair well with the entire breadth of foods. But pan-roasted duck or quickly seared scallops can pick up these yeastier, younger cavas quite nicely.”

The first question that wine seller David Russell asks customers shopping for sparklers at Berkeley’s Premier Cru is how much they want to spend. For $350 a bottle, they can have Roederer Cristal Rosé. But $40 or $30 or even less buys respectable French Champagne, whose superiority Russell avows. “The Champagne region’s chalky soil is unique,” he says. “It imparts a certain tension and minerality to the wine, then an energy and aliveness to the palate.”

Russell says that one of viticulture’s most exciting recent developments is the advent of “grower Champagnes”—that is, single-grower Champagnes—“which are both vinified and bottled by the same guy who grew the fruit.”

This is a departure from the standard practice at large Champagne houses, which blend various types of grapes from many different growers every year.

“I couldn’t even begin to tell you how many growers are responsible for a single year’s vintage at, say, Veuve Clicquot,” Russell says. “Fifty? A hundred? The basic notion behind grower Champagnes is that Champagne is just as capable of expressing terroir as any other type of wine. If you’re blending grapes from multiple terroirs, then the peaks and valleys of those flavors get flattened out.” (Not to be confused with “terror,” terroir comes from the French word terre, meaning “land”; it denotes the specific soil, climate, and even the slope where the grapes in a certain wine were grown.)

That’s business as usual at the big Champagne houses, he says, “because their ethos is consistency. If you could just see how much Champagne is pumped out by, say, Moët et Chandon—it’s oceans of the stuff.”

By contrast, grower Champagnes—which insiders call “farmer fizz”—are made according to the same ethics and aesthetics as artisanal chocolate or cheese.

“It comes down to that same choice: artisanal versus industrial,” Russell says.

As much as he loves sparklers, Russell doesn’t buy the fad for serving them throughout a meal.

“Pork or veal, maybe. But I draw the line at rack of lamb. I can think of five things right off the bat that go better with beef cheeks. And if I was eating a squab and someone served me Champagne with it, I’d think: I wish I had a nice glass of Burgundy right now instead.”

But for many—including the Claremont’s Sean Hubbard—those bubbles always beckon.

“Even when I just look at sparkling wines,” Hubbard says, “I get a fresh, effervescent feeling. Sparkling wine is happy wine. When you take a sip of it, you’re looking to feel happy. If you’ve had a bad week, sparkling wine will wipe that away.

“No matter what you’re doing—whether you’re sitting down to have a meal with someone special or you’re celebrating a special occasion or you’re just celebrating life—sparkling wines take that experience to the next level. They kick every conversation up a notch. They give everything a joyous feeling, an excitedness. They work wonders.”

———————————————
Anneli Rufus lives in Berkeley and is the author of several nonfiction books, including Party of One: The Loners’ Manifesto and the Nautilus Award–winning Stuck: Why We Can’t (or Won’t) Move On. 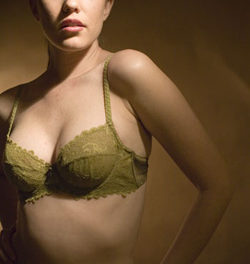 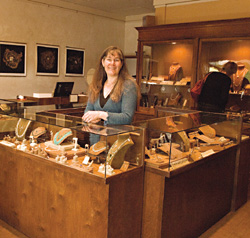 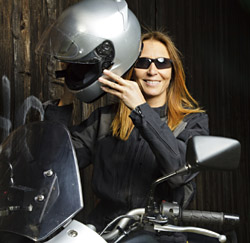 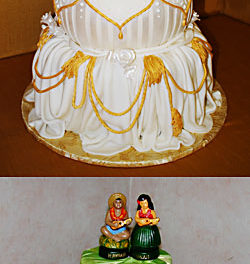