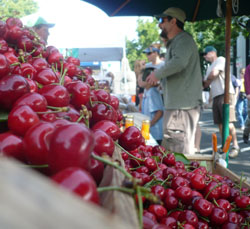 Amid the strawberries, peaches and cherries, a bounty of community.

In downtown Berkeley, my East Coast friend Nora was in farmers’ market heaven. Along on my weekly market trip, Nora slowed me down considerably, stopping to admire the baby arugula and sample some organic lemon sorbet. I was loading my bag with fuji and pink lady apples when I noticed that she’d stalled again, this time at an array of peppers in shades of red, orange, yellow and purple. As Nora “peppered” the farmer with questions about which were spicy and which sweet, I considered my good fortune as a regular market shopper. Tough choices, like “should I go with the portobellos, shiitakes or criminis?” have become the norm.

With 28 farmers’ markets in Alameda County, including three in Berkeley and 11 in Oakland, the markets are clearly thriving. East Bay residents are flocking to these neighborhood, outdoor sites—large and small—to find organic, locally grown produce, as well as bread, cheese, jam, meat, fish and homemade treats like crepes, samosas and flautas. Specialty items range from flourless baked goods to herb-infused olive oil to kimchi; from plants and flowers to local handicrafts. 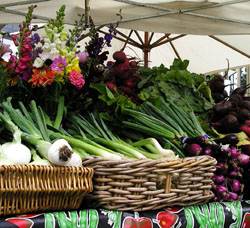 Residents also come for something less tangible and equally compelling: community. “It’s a whole event,” says Berkeley mom Marites Abueg, at the Saturday market with her two daughters. “We ride our bikes here. We meet our neighbors, and the kids play in the [nearby] park.”

Over the last decade, an interest in organic, sustainably grown food, and a parallel concern with supporting things locally produced have dovetailed to benefit the markets, says Kirk Lumpkin, special events and promotions coordinator for Berkeley’s markets. And, he says, “a lot more farms have discovered farmers’ markets and found that it’s a way to survive.” At Berkeley’s Saturday market, at Center and Milvia, the number of customers on a single Saturday rose from 3,800 in June, 2001 to 5,205 in June, 2007.

On a Tuesday in May, Berkeley’s Derby Street market was buzzing: summer fruit had arrived. The fragrant scent of ripe strawberries wafted through the air, while velvety peaches and purple-red cherries toppled from full bins. Most people first mention the high quality of the produce when explaining why they choose to shop at farmers’ markets. Berkeley resident Penny Brogden, a regular Saturday and Thursday market-goer, comments on our powerful, primal response to newly picked food. “People taste something fresh and say, ‘I remember this; this is the way we used to eat’ . . . [It’s] as if some deep memory has been uncovered.” Foodie expert and author Michael Pollan agrees, noting that the trend toward farmers’ markets is actually a step back in time to the way our grandparents and their grandparents used to live and eat.

For shoppers like Brogden, buying organic products—grown without pesticides, chemical fertilizers, bioengineering or ionizing radiation—is a priority. “I remember when they started irradiating potatoes in the ’80s,” Brogden recalls. At the time, she wondered how people would know what was irradiated and what was not. “You couldn’t know,” she says. “That’s when I got interested in organic food.”

Not all farmers’ market food is organic, so look for the certified organic (CCOF) signs. (Transitional produce is in the process of becoming organic; conventional refers to food grown using chemical fertilizers and pesticides.) Whether or not they’re going organic, many shoppers appreciate the chance to buy locally, reduce food packaging and transport, and deal directly with the farmers. “There’s such a dislocation from food production in America,” notes Daniel Alafetich, whose Oakland company Hodo Soy Beanery sells handmade tofu products. “Customers enjoy meeting the producers.”

Peter Jenkins, who frequents the Old Oakland market at Ninth Street and Broadway on his Friday lunch hour, likes the chance to be “one step closer to the field or the farm; you’re supporting the farmer in the most direct way you can.” If you lack time to wander the markets, but want to support local farms, sign up for a CSA (Community Supported Agriculture) Box. For about $17 per week, you can go to one of several markets to pick up a sampling of enough fresh and local produce for two to four people. For an extra fee, the box will be delivered to you.

High market prices, especially for organic items, force some customers to weigh their options. One Berkeley shopper says she’d rather buy a small amount of organic meat and forgo meat on other days. Many say the quality compensates for the cost. At the Old Oakland market, where items are generally not organic, shoppers note that the produce is less expensive—and much fresher—than in the supermarket. One woman showed me a bag filled with Japanese daikon, which had cost her just one dollar. Organic food costs more for several reasons, including the extra fees farmers pay to be certified as organic, financial losses from crops damaged by insects and exclusion from government subsidies given to conventional farmers.

Each market has its own flavor, with smaller, cozy settings like the Montclair, Kensington and Orinda venues, and larger, more urban sites like Jack London Square and Alameda. Some are spread over city streets closed to traffic, while others, like the Temescal market at the Oakland DMV and the Kaiser Permanente markets, are held in the parking lots of local organizations or businesses. About three-quarters of the East Bay markets are year-round, some on weekdays and others on weekends.

At Friday’s bustling Old Oakland market, workers from downtown offices mix with shoppers from nearby Chinatown. People eat on the go at small tables or perched on street-level window ledges, from plates laden with offerings like chicken tamales or falafel. The mood is more leisurely on a Saturday afternoon in Berkeley, where shoppers dine on the grassy strip alongside the market’s white canopies.

The social scene spans all ages. Recently at North Berkeley’s Thursday afternoon market, preschoolers waited eagerly for classmates at what’s become an impromptu after-school event. And while they’re socializing, the kids broaden their palates, too. “It’s a positive peer culture for the kids,” said Jennifer Sime, noting that her 4-year-old daughter Anni was willing to try a Hog Island oyster at the market because she saw her friend Lilah eating them. (Adventurous young Lilah was also seen chomping on a gigantic stalk of fresh fennel.) My own teenage son Alex says he became a fan of goat cheese years ago when a friend dared him to take a sample at the farmers’ market.

Adults get to try new things, too. Strolling through the Old Oakland market, I learned that gaillon is Chinese broccoli and ching gong choy a type of bok choy. A vendor selling quail eggs, salted duck eggs and chicken balut explained that balut is Filipino for embryo. Standing in line, a man asked fellow shopper Katherine Webb-Martinez for advice on how to prepare the quail eggs. She responded that he could use them like regular eggs “or else boil them, cut them in half and put in a dollop of caviar.” Smiling, she encouraged him to give it a try.

Those of us still figuring out how to cook our leeks or chard (or even quail eggs) aren’t the only ones frequenting the markets. “Restaurants are a major source of business for many of our farmers,” says Lumpkin. “Along with numerous other restaurant buyers and chefs, someone from Chez Panisse is always at the Berkeley markets on Tuesday and Thursday; the executive chef from Lalime’s comes every Saturday and Thursday. They’re looking for the finest ingredients, like which variety of apple is best for some specific dish, and if there is something unusual that they haven’t tried before.”

Restaurants like Chez Panisse have inspired everyday cooks to buy directly from local farmers and to prepare what’s in season. “People are getting more sophisticated; they want fresh, organic items and aren’t concerned with perishability,” says Alafetich of Hodo Soy. “They shop at the market and then make dinner that night.”

Through tastings and cooking demonstrations, the markets foster experimentation with new foods. The Pacific Coast Farmers’ Market Association, a market umbrella group, sponsors demos known as “Cookin’ the Market” throughout the East Bay. Their recent demo at Jack London Square featured asparagus pesto and an asparagus salad made with fennel, lemon juice and olive oil. Chef Chris Hay selected his ingredients at the market, prepared his dishes on the spot and passed out samples. “People were shocked that raw asparagus could be so tender,” says Thomas Dorn, manager of the Jack London Square market. “It’s tender because it’s so fresh.” At the Berkeley markets, Lumpkin offers simple demos that people can replicate at home, like cooking greens or beets. Recipes are handed out to make it even easier.

In spite of their differences, markets share the role of local gathering spot, a place to meet and greet, enjoy the fresh air, inhale the sweet aroma of popping kettle corn and explore what the community has to offer. Residents come to get their bicycles fixed or their knives sharpened; they sit back and listen to chamber music or twangy banjo; they take a break from shopping to relax into a massage, consult with the plant doctor and learn about their city’s latest ballot initiatives.

Market organizers are also reaching out to their communities through services like voter registration, health screenings and opportunities for kids to sell things they’ve made or grown. Berkeley’s Ecology Center, which runs the Berkeley markets, also operates Farm Fresh Choice, bringing produce at wholesale prices to communities where access to good, fresh food is limited. “Each farmers’ market should be a reflection of the community it serves and a resource for those who call that community home,” according to the Pacific Coast Farmers’ Market Association, which operates 11 Alameda County markets, including the one in Jack London Square. The association not only welcomes shoppers, but also makes market space available so local businesses, nonprofits and community groups can promote their services. Vince Scalise, senior market manager at the association, sees it this way: “We’re about bringing the farmers into the community and bringing the community together.”

Back at the Saturday market, I was ready to leave, but my friend Nora was still shopping. Though we were weighed down with produce and the ice cream was starting to melt, she was busy admiring some eggplants, noting their rich purple-brown color and smooth, firm skin. Ten minutes later (and two eggplants heavier), we finally headed home, happily planning the ratatouille we’d make for dinner.

———————————————
Rachel Trachten is a freelance journalist and regular contributor to The Monthly. 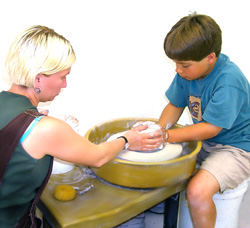 The Science of Summer Camp 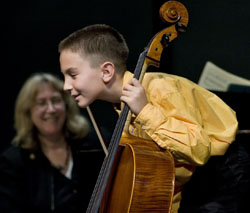 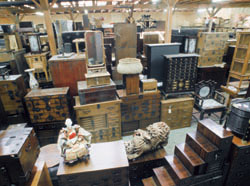 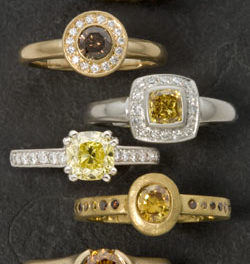