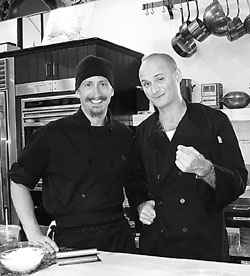 Watching the Food Network’s perky Rachael Ray make a 30-minute meal might be amusing, but sometimes the joys of cooking are best experienced live. North Berkeley’s famous food corridor has produced some of the nation’s finest cuisine and now its Kitchen on Fire cooking school is helping regular food-lovers do the same. Launched a year and a half ago by author and restaurateur Olive Said and chef MikeC., Kitchen on Fire is a hands-on experience with some top chefs, including Said, MikeC. and Jean-Pierre Moullé of Chez Panisse.

“Cooking has become so intimidating,” laments MikeC., the school’s chief instructor, about the Bay Area foods scene. “All of this insanity has scared people away from cooking for themselves.”

Located next to Chez Panisse and above the Epicurious Garden, Kitchen on Fire offers classes for people of all ages and experience, embracing the theme from Pixar’s summer movie Ratatouille: Anyone can cook.

Patricia Lewis says hair-styling was her means of learning English while doing something she loved after moving to the United States from Venezuela some 20 years ago. At her La Peluqueria salon, tucked behind a Starbucks in North Berkeley, Lewis offers cuts, colors, perms, facial waxes and loads of personal attention. “It feels great to get such a diverse group of clients because there was a lot of segregation in the salons I used to work in,” says Lewis. “But here I know how to do hair for clients of all backgrounds, so everybody comes in.”

As her cozy, yellow-hued shop has grown, Lewis has gotten more English than she’d ever expected. “Many of the clients are my friends, so it’s always personal with lots of conversation,” she says. “Sometimes it’s like they’re in therapy!”

Say ‘om’ to the outdoors

Ivan Shvarts grew up in Eastern Europe but embraces the art and design of the Far East. He came to the United States from the Ukraine in 1975 and opened his Zen Landscaping and Design company in 1989. After stints designing projects in Los Angeles and studying for a year and a half in Japan, Shvarts is feeding the Bay Area’s voracious appetite for Asian gardens and design.

“I design and build gardens, meditation rooms and teahouses in the Zen tradition, always incorporating the art and architecture of ancient Japan in my work,” says Shvarts. Shvarts builds Japanese soaking tubs, called ofuro, which are similar to bathtubs but are deeper and made out of cedar. The tubs are filled with hot water for the ultimate experience in relaxation.

“I also offer a salt-room sauna that I created that purifies the immune system and rejuvenates the skin, helping to relieve allergies, asthma and other respiratory problems while reducing stress,” Shvarts adds. He likes to create unique Zen environments by combining landscaping with spas or art studios. He’s a licensed contractor who does new construction and remodeling.

In case you haven’t noticed, there’s a baby boom afoot—a reproductive upswing some attribute to the auspicious Chinese Year of the Golden Fire Pig. Former clothing designer and interior decorator Anne Marie Elliott has taken advantage of the trend with her new shop, Grove Street Kids, a cheery environment offering a mix of new and gently used resale clothing, at resale prices. Elliott brings her artist’s eye to every detail (she did interiors for IKEA), creating a space that is welcoming, crisp and smartly appointed.

“People are pleasantly surprised the items are resale,” she explains. (Her buying policy for resale clothing is 60 percent in trade and 40 percent in cash.) The new clothing is mostly name-brand closeout and clearance merchandise from popular stores in the area.

Ample one- and two-hour street parking plus a kids’ play area in the store make the experience especially easy for harried parents. Oh, and the shop’s name? Old Berkeley natives surely know that Martin Luther King Jr. Way used to be called Grove Street. “It’s an homage to the old neighborhood,” says Elliott, who grew up nearby. 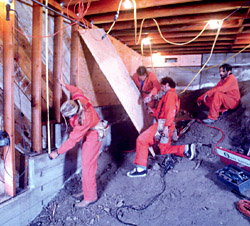 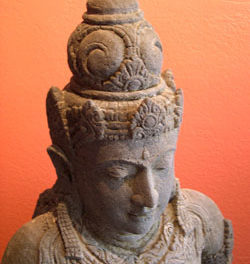 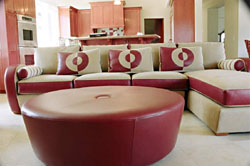