I ‘m not sure when exactly it happened, but somewhere along the line, I became disenchanted with tapas.

And it wasn’t for lack of options. Spanish-style restaurants have been enjoying a renaissance in the Bay Area, exemplified in part when Michael Chiarello, king of California-Italian fare, opened a tapas spot a few years ago in San Francisco. So, yes, as top local chefs have embraced the cuisine, the results could be very good, excellent even. But I found that at best, the food was delicious but expensive, and at worst, the small-plates format was just culinary sleight of hand to bilk more cash out of diners’ wallets. And it seemed like I almost always left hungry.

The spirit upon which this eating style was originally conceived—conviviality, community, generosity—appeared to have been lost in translation.

And that’s the really nice thing about La Marcha, the new Spanish tapas bar on San Pablo and University avenues in Berkeley: You don’t feel like you’re being ripped off. There’s an undercurrent of generosity that underpins the restaurant’s sleek interior and lends it that bit of heart and soul that push it beyond a mere passing fad.

That, of course, is something that trickles down from the top. Owners Sergio Monleon and Emily Sarlatte first met while working for Trattoria La Siciliana, a restaurant that has endured for decades as a go-to spot in Berkeley’s Elmwood neighborhood as much for its warm atmosphere and liberal serving sizes as for its (very good) food.

It turned out the two shared a passion for Spanish cuisine, which they each came upon independently. Sarlatte had spent time in Spain studying abroad during college, while Monleon’s father is Spanish and a chef, and he lived in Madrid for six years. Both fell in love with the ubiquitous neighborhood tapas bars, treated by locals as way stations to stop and snack while out on traditional bar crawls (called a march, or la marcha in Spanish).

The two partnered up to start Ñora, their popular East Bay paella-centric catering company in 2013, and then got the itch for something more. They signed a lease for the space near University and San Pablo avenues, and after an extensive renovation, debuted La Marcha in October.

The goal, Monleon told me, was to re-create that communal Spanish tapas bar spirit in Berkeley, and the most obvious manifestation of that is La Marcha’s happy hour, which offers complimentary tapas with each purchased beverage both early (4–6 p.m.) and late (10 p.m.–midnight).

FYI to free food–seekers: that special is only available at the bar, something that’s not made totally clear on the website. Luckily, it’s quite a bar, taking up nearly the entire length of one wall—indeed, Monleon said La Marcha consciously made the decision to feature a big bar, at the expense of more general seating, in order to facilitate a lively atmosphere. And it seems to have worked: Happy hour has proved so popular that La Marcha decided to incorporate a dedicated menu with a selection of smaller-proportioned tapas for $2 to $3.

But you shouldn’t feel the need to dine elsewhere if there’s no room at the bar or you show up between 6 and 10 p.m. La Marcha’s menu is fun and approachable, and the portion-size-to-price is fairly generous—tapas are mostly under $10. Likewise the pours of wine—La Marcha carries several Spanish brands, although my favorites were those on tap from Oakland’s Urban Legend Cellars—were ample, not the miserly-measured portions that seem so common at hip restaurants these days.

If you do find yourself there for dinner, definitely start by exploring those 20-plus small bites, which almost without exception hit the mark.

We started with a couple of traditional Spanish classics, patatas bravas and a tortilla da papa, and neither disappointed. The potatoes were light and airy in the middle and crispy on the exterior—having been boiled and then fried—and served with either a pleasantly spicy ñora sauce spiked with Calabrian chilis or a creamy truffle aioli. The delicate tortilla omelets—made with egg, potato, and sweet onion—are served in three bite-sized portions and provide a pleasantly light start to a meal.

Other standouts included the hamburguesas Morunas, juicy cumin-spiced lamb sliders served with a harissa aioli and cleverly topped by a minted cucumber rather than a pickle. The unexpectedly complex kale, sautéed to a collard green-like consistency, was mouth-puckeringly lemony but beautifully balanced by savory jamón serrano and sweet dried cranberries. The head-on gambas were a messy delight, perfectly fresh and satisfyingly drenched in garlic anchovy butter. (You’ll likely need extra napkins for that one.)

Then there were the mushroom croquettes, which, filled with a creamy, porcini-shiitake mushroom and béchamel sauce, reminded me nothing so much as of an über-gourmet mozzarella stick. That’s not a knock, either. (Who doesn’t love a mozzarella stick?) In fact, it illustrates something I enjoyed about eating at La Marcha: Dishes were, for the most part, accessible, and comforting—there are some real crowd-pleasers sprinkled through the menu. That’s not to say the food is simple—Monleon told me they steep the béchamel in dried porcini before carefully folding sautéed mushrooms into the sauce—it’s just not overly precious.

Not everything worked. The albondigas—normally a personal favorite—were dry and cardboard-level flavorless. The grilled-market veggies, consisting of sliced squash and few sad onion rings, were under-proportioned and uninspired. Still, it’s hard to bat 1.000 when you’re churning out more than 20 tapas. Plus, La Marcha has one more ace up its sleeve: paella.

The dish is, after all, the co-owners’ specialty and calling card in the Bay Area, so it seemed like a no-brainer to feature it at La Marcha. However, Monleon said La Marcha struggled over whether to offer it at the restaurant, thinking La Marcha wanted to be able to explore other aspects of Spanish cuisine free from the shadow of paella. Ultimately, they decided they couldn’t not serve their signature dish, and I think it was a smart decision.

Those five paellas are a comforting presence for diners who, like me, get nervous about the prospect of too few tapas shared between too many people. The menu says each order serves two to four, but I’d lean more towards four—it’s a lot of food, composed mostly, reassuringly, of filling rice.

It’s also damn good. Monleon said they have one chef in the kitchen devoted solely to making the paella, and that shows in the final product. As is traditional in Spain, the rice is infused with saffron, but not overwhelmingly so. The texture is wet but not soggy, and, while it’s not overloaded with toppings, the paellas are all excellent quality. I tried the Valenciana and the Negro. Of the two, I preferred the lighter Valenciana, which was topped with slices of delicious, moist duck breasts along with snails, rabbit, and green beans. The Negro wasn’t unenjoyable; it was just far more intense, served with clams, anchovy breadcrumbs, and uni aioli, and drenched black with squid ink that lent the entire dish a potently briny, faintly iodine-y, flavor. I liked it; I just wouldn’t want to eat too much of it.

Then again, I generally wouldn’t have to. The paella, like the tapas, is meant to be a shared among friends. Just as the generous happy hour is a gesture meant to draw people together into a festive atmosphere, La Marcha was conceived not as a foodie destination where diners quietly contemplate each bite, but as a neighborhood gathering spot that happens to serve good food—and where folks can eat a full dinner or just grab a bite and a drink to start or end the night.

It really is a very Spanish notion of dining to bring to Berkeley, a city not exactly known for its freewheeling drinking and dining ways. But when I saw the bar at 5:30 on a Sunday packed with patrons drinking wines, noshing on tiny tapas, and generally just having a good time, I started to think it may not be such a tough sell. 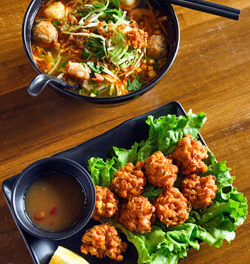 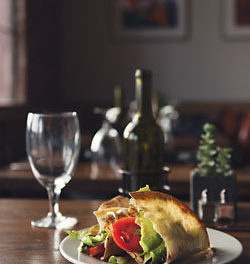 The Ascent of the Eggless Soufflé 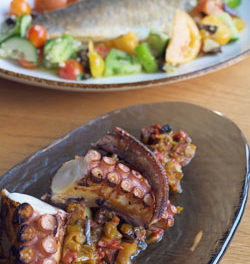 ZINO Shows off the Flavors of the Sea 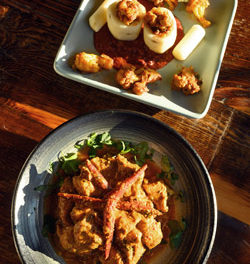