A Crash Course in Casablanca 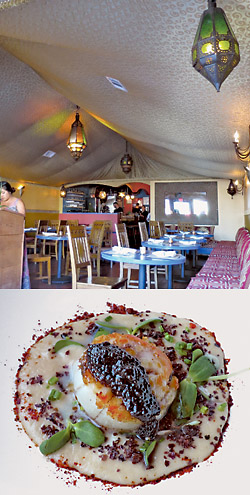 We know far too little about Moroccan cuisine. Luckily, Doukkala is here to help.

Cooked into a stew, served in a big white bowl atop a sea-blue table, these components are heavy and dense—not just in a physical, fresh-from-the-farmers-market-at-the-peak-of-their-season sense, but also in a fundamental, metaphysical sense.

Simmered to the perfect point of tooth-tenderness, they’re color-coordinated so as to set upon each other at least six shades of green and three of red, with earnest browns and golds bridging the gap. Thick brick-red broth cradling its contents as if both liquid and solid were striving to meet at some transcendent textural midpoint, this dish demands to be devoured.

And when you do as the stew begs and start eating it, every bite brings a softness-upon-softness that is earthy. Leafy. Starchy. But also spicy—not peppery-hot but aromatic in the way of ancient things. Infused in that natural vegetable neutrality is a dark chorus of haunting, heavily sweet notes. Cumin. Cinnamon. Sun-soaked saffron. We know these notes, but not necessarily in the same song.

The elusive yet irresistible flavor profiles of this dish and its neighbors on this table send savvy East Bay diners scratching their heads. It’s not Greek, not quite Catalunyan. What, then?

Moroccan. This stew—served at Doukkala in Oakland’s Temescal district and made even sunnier with that tangy Moroccan staple, preserved lemons—is a vegetarian tagine, pronounced with a soft G, as in regime.

Morocco is one of those places whose name we all know but about whose history, society, and presence as an actual place most of us draw a big, sirocco-scarred, palm-fringed blank informed mainly by Casablanca and that 1942 Bob Hope classic, Road to Morocco. Quizzed at harissa-point about this North African kingdom, most of us couldn’t divulge more than camels, dunes, and Arabic-accented French.

This knowledge gap is intriguing. After all, the average East Bayite knows a surprising amount about much more exotic lands. Burma? That’s where they eat fermented tea leaves! El Salvador? Pupusas! Morocco?

We know little about Moroccan food because Moroccan restaurants command a comparatively low profile on our local skyline—a puzzling paucity given the inherent appeal of this lush and diverse cuisine, and given the many ways in which Morocco is California’s Levantine twin. Both have wine-growing regions. Both boast Mediterranean microclimates, searing deserts, sophisticated cities, and pristine strands where surfers stride seaward across gold-satin sand. Tourism is a top moneymaker for both. But we don’t know our chermoula from our chebakia? Shame, shame.

Luckily, Doukkala is here to help.

Take harira. No, really: Take a bowl of this gingery tomato soup. You’ll be grateful.

“The traditional Moroccan recipe calls for pigeons. Instead, I use the local equivalent,” quips executive chef Eric Lanvert, laughing harder upon being reminded that in actual fact, pigeons are currently more plentiful and thus more local than our small, scarce, top-knotted state bird.

Sometimes he makes pastilla with scallops, sometimes with lobster or lamb. Lanvert changes menus “whenever I feel like it. Why not? I have a printer right upstairs.”

Having spent more than 15 years as the owner of two now-shuttered San Francisco restaurants, Rue Saint Jacques and Côté Sud, Lanvert now calls helming Doukkala’s kitchen “a vacation.” No, he’s not Moroccan. But growing up in the city of Perpignan at the heart of France’s historic Languedoc region, a stone’s throw from the Mediterranean and an hour’s drive from the Spanish border, lent Lanvert a lifelong familiarity with the flavors and character of Moroccan cuisine.

“Its mix of spices makes sense to me. Moroccan food, like all Mediterranean food, is heavily influenced by Greece and Turkey and the trade routes that have flourished for thousands of years. It’s a very natural and familiar thing for me because of where I grew up.”

He buys ingredients at East Bay farmers markets and “wherever else I see what I like.” For instance, whole-wheat couscous—on which he insists—is rare hereabouts, but he finds it at Trader Joe’s.

“And I went to Mendocino one day and saw all these locally harvested seaweeds being used in dishes that required no salt at all. The seaweeds provided all the saltiness these dishes needed.”

A look of awe washes over his face as he recounts this memory. Some of the seaweeds he discovered that day now adorn one of the current menu’s most rapturous marvels: a rich, robust sunchoke velouté ringing sautéed, caviar-capped Pacific Northwest day-boat scallops. These plump scallops—along with the saffron-brothed Prince Edward Island mussels, Totten Inlet oysters, grilled salmon, and other seafood served here—are almost shockingly eloquent in their straightforward simplicity. But the velouté is a flavor-texture festival whose confetti, infinitesimal seaweed flakelets, provide what could very well be, by the mouthful, the Western world’s subtlest and most mysterious crunch.

Also dotting this dish is amlou, a toasty-tasting peanut-butterish paste made from the crushed nuts of the sturdy, endemic-to-southwestern-Morocco argan tree, whose fruit is often used there in place of olives. Bandwagon alert: Could this be the next hummus?

A value-driven wine list spotlighting both local and Moroccan small-batch vintages echoes one of Lanvert’s top priorities: offering high-end meals at low-end prices. This is best achieved by ordering half-portions of entrées such as seared lingcod or the meatless tagine: They’re just as big and satisfying as whole portions in similarly stylish, we-know-the-meaning-of-mandoline restaurants.

“I’d been so disappointed with all the baklava I’d tasted in the Bay Area,” the chef laments. Too sugary. Not enough nuts. The sole solution: reinvention. And it’s served, as Moroccans prefer it, with aerated mint tea. Yes, that will be on the midterm. 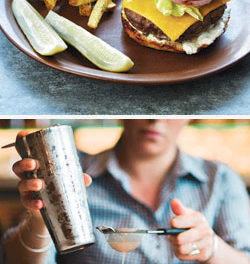 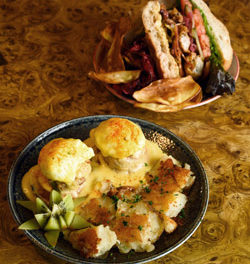 Take the Road to Nobilis 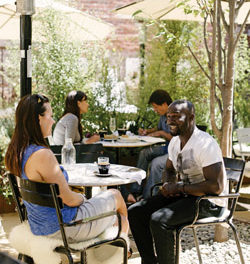 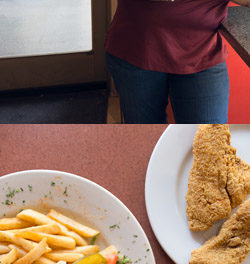