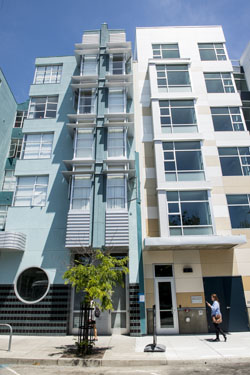 During last year’s Berkeley mayoral race, Jesse Arreguin argued that his position on housing had “evolved.” His record so far undermines that claim.

Berkeley Councilmember Ben Bartlett deserved credit, and his colleague, Councilmember Lori Droste, was giving him his due. Bartlett had worked countless hours, hammering out a deal between developer Realtex and local community members over a plan for 50 units of much-needed housing near the Ashby BART station. The negotiations had dragged on for months, as community members demanded more affordable units for low-income residents and more community benefits from the developer. Eventually, Bartlett convinced Realtex to include 10 below-market-rate apartments in its six-story project and to fund legal help for local tenants facing eviction.

But as Droste praised Bartlett for his hard work at the April 25 council meeting, Mayor Jesse Arreguin, visibly irritated, interrupted. “He wasn’t the only one,” Arreguin blurted out. The mayor clearly wanted credit for also helping negotiate the deal with Bartlett and Realtex. So Droste quickly gave kudos to Arreguin, too.

But then, less than an hour later, Arreguin declined to vote for the deal he demanded credit for, and it went down to defeat. Instead, the mayor voted for an alternative plan backed by Councilmembers Sophie Hahn and Kate Harrison that included fewer affordable units: six rather than 10. Why? Because it meant the housing project would be smaller. Hahn had complained that the deal Bartlett had struck would have resulted in a building that “loomed” over the neighborhood (even though it would have been next door to a five-story building).

Arreguin’s about-face that night—his refusal to vote for a housing deal he wanted credit for—was not unusual occurrence. Instead, it was emblematic of his short tenure as mayor when it comes to the topic of housing.

During last year’s mayoral campaign, Arreguin repeatedly rejected criticism that he was backed strongly by antigrowth advocates because he was a NIMBY (Not In My Backyard), too. In an interview last fall with Oakland Magazine, Arreguin asserted that his position on growth had changed as the housing crisis worsened and that he was less inclined to side with NIMBYs. “I think my perspective has evolved over the years,” he said at the time.

But since winning the November election, Arreguin, who considers himself to be a progressive, has repeatedly voted against housing proposals in the city even though Berkeley’s housing shortage has intensified. In fact, this spring, the mayor even floated a proposal to “downzone” areas of the city—a move that would have banned the construction of apartment buildings in more Berkeley neighborhoods, thereby making it even harder for people to find places to live. The mayor’s proposal also sought to establish rules that would allow the city to block dense housing if it created “shadows.”

“It’s completely wrongheaded and the opposite of progressive,” said Droste, an advocate of building more housing for all income levels in Berkeley. “It’s pretty hard to argue that you’re pro-housing when you’re downzoning.”

In a recent op-ed published by Berkeleyside, Droste was joined by several noted housing experts, including three UC Berkeley professors who have studied housing issues for decades, in a stinging rebuke of Arreguin’s proposal. They noted that white wealthy residents in upscale areas of Berkeley and Oakland had used downzoning, also known as exclusionary zoning, in the 1950s, ’60s, and ’70s to make it harder for people of color to live in their neighborhoods. “Downzoning would be a disastrous step backwards for Berkeley and will undoubtedly worsen affordability and lead to even more displacement and exclusion,” wrote the authors, including Cal professors Karen Chapple, Carol Galante, and Jeff Vincent.

In a separate op-ed, Bartlett, who is black, and his wife, Yelda Bartlett, also argued against exclusionary zoning, noting its racist roots, and contended that the city should consider finally allowing apartment buildings in wealthy neighhorhoods that currently prohibit them. “If we continue to limit the construction of apartment buildings to only one part of town, we will not meet the needs of seniors, the working class, low-income people, and young people,” the Bartletts wrote.

Bartlett was also visibly upset at the April 25 hearing when Arreguin refused to vote for the Realtex deal, especially after a series of white Berkeley residents complained about the “shadows” it would cast and alleged that the housing development would accelerate gentrification around Ashby BART. “I love it when gentrifiers tell me about gentrification,” Bartlett tweeted that night.

Arreguin’s downzoning proposal grew out of another housing plan he opposed this year—and a recent lawsuit filed against him and other councilmembers who also voted against the project. That proposed development involved just three units of housing on Haskell Street in South Berkeley. After the council had rejected the three-unit project in 2016, a pro-housing group, California Renters Legal Advocacy and Education Fund, or CaRLA, sued Berkeley, contending that the council had violated the California Housing Accountability Act. Members of CaRLA, who consider themselves to be YIMBYs (Yes in My Backyard), noted that the Housing Accountability Act prohibits cities from denying approval of housing projects if those projects conform with local zoning rules. In this case, the Haskell Street site was zoned for up to four units of housing.

As part of a legal settlement, Berkeley agreed to rescind its rejection of the Haskell project and give it another public hearing. But then during a Feb. 28 council meeting, Arreguin led an effort to once again turn down the Haskell Street housing plan. Arreguin argued that the city could ignore the Housing Accountability Act because the three-unit project required a special city permit to demolish a vacant home on the property. If the city were required to approve the project, the mayor contended, it would make it difficult for Berkeley “to shape its built environment.”

“We need to take a legal stand to defend our neighborhoods,” Arreguin said, after a group of Haskell Street neighbors complained that the three-unit project was “too dense” and would create too many shadows.

After the council’s vote, CaRLA sued the city again, pointing out that Berkeley City Attorney Zach Cowan had disagreed with Arreguin’s argument and that the demolition permit, in all likelihood, would not exempt Haskell Street from the Housing Accountability Act. In an interview, Brian Hanlon of CaRLA, noted that nearly every housing project requires some sort of special permit, like a demolition permit, so if cities could use such permits to avoid compliance with the Housing Accountability Act, then the act would become moot. “If the locality had the ability to come up with a discretionary permit to build housing, then every city in the state would do it to block housing,” Hanlon said.

Arreguin did not respond to requests for comment for this report. Ultimately, the city council approved a smaller version of the Realtex project at Ashby BART—with nine affordable units rather than the 10 Bartlett had previously negotiated. And after the op-eds and other criticism, the mayor pulled his downzoning proposal, claiming it had been misconstrued.