Stephan Pastis on Rat, Pig, and living the legal life.

Dissatisfied with life in the lawyer lane, 38-year-old Albany resident and would-be cartoonist Stephan Pastis played hooky from his big-time SF law gig in the mid-’90s and headed to Santa Rosa one day to stalk cartoonist Charles Schulz at the late master’s ice rink café. Schulz poured over Pastis’s comic output and offered advice. When Pastis’s strip, Pearls Before Swine—featuring the exploits of a smart-ass rat and a clueless pig—went into print five years ago, he could finally belt out “take this job and shove it.” Now printed in more than 300 papers, the strip won Pastis the National Cartoonist Society’s “Cartoonist of the Year” award in 2004. I caught up with Pastis as he plugged his new collection of strips, The Ratvolution Will Not Be Televised (Andrews McMeel, 2006).

Paul Kilduff: For somebody who wanted to be a cartoonist you took on a pretty heavy career. Does anybody really like being a lawyer?

Stephan Pastis: You can do it for a while but after enough time—for me it was nine years—it wears on you. And I think that’s why all lawyers have escape plans. Whether it’s opening a winery or becoming a writer. I just tried to survive and do the best I could and I’d still be a lawyer right now if the cartoon hadn’t made it. I guess I became a lawyer for the money, which is probably the wrong reason to become a lawyer.

PK: I remember a friend who became a lawyer, all he would talk about is how much money he’d make ($50K) coming out of Hastings in the ’80s. It still seems like a lot to me, come to think of it.

SP: I remember being aware when I was at Cal of the salary of a Boalt grad. It was like $75K. I remember thinking holy smokes.

PK: You don’t seem like a guy who likes to argue. You seem pretty mellow.

PK: Did your East Bay experience contribute to your cartooning in any way?

SP: Berkeley formed me to a huge extent. I grew up in San Marino in Southern California—very, very conservative, old money, former home of the John Birch Society. So going to Berkeley was a big deal. The first demonstration I saw (I think it was an anti-Apartheid one) just blew me away. It was just so free. And chaotic. And open. And I learned about rock music. I never had any tapes or anything when I was in high school. I was a real geek.

PK: What were you raised, Amish?

SP: You would think so. We had electricity. I remember a guy down the hall from me in my dorms (he turned out to be a lawyer). He introduced me to the Beatles and the Rolling Stones.

PK: What were you doing in high school?

SP: I was on the debate team. And I had a 4.4 GPA. Just straitlaced as could be. And in Berkeley, in the hall of every dorm, you’d smell pot. That’s a big change from the little manicured lawn smell of San Marino.
PK: A different kind of grass, mein Freund.

SP: I can still see it in the strip. Occasionally I’ll have a reference to Mario Savio or protesting. There’s a series coming up where Rat becomes Bob Dylan. These are all things I picked up when I was at Berkeley.

PK: This trend in daily newspaper comics where characters end up in strips other than their own—would Schulz have appreciated seeing Peanuts characters in Pearls Before Swine?

SP: I think the comic page tends to be such a static, boring, predictable page that as far as I’m concerned, anything that sort of shakes that up and makes you look twice at it—especially now when young people are barely reading the paper—is a good thing. I don’t think Schulz would have liked it.

PK: What about Bil Keane of Family Circus fame—his work seems to end up in a lot of other cartoons including yours. Why? To me that strip is the corniest thing in any paper.

SP: He’s a really great guy. And he’s got an amazing sense of humor. He opens up the Reubens every year with comments you wouldn’t expect from Bil Keane. His opening line is always, “I have to tell you it’s more than a thrill to be here. In fact it’s a goddamn nuisance.” So right away you go “Wow, this guy’s not who I thought he was.” And it’s not a clean sort of funny. It’s like an edgy sort of funny. The reason why I pick it [Family Circus] is the same reason I did a couple with the Care Bears in January. For it to really look right you need a pure form to play off of. I’m not making fun of the strip like I did when I did some Cathy ones. Family Circus, is in its own world that appears to be in some sort of time warp of goodness. Whenever you take a pure form like that and you place it side by side with the edginess or darkness of my strip, that’s funny. For the incongruity to work I need to get something as far away from myself as I can.

PK: What about the overly simplistic drawing styles in today’s comics—like your buddy Scott Adams’s Dilbert. It’s funny, but Adams’s drawing style is so sterile.

SP: From laughing at his strip in the mid- to late-’90s, that’s when I said I got to do this ’cause I thought that was so funny. I like minimalism. If I could really draw I still would do much of what I do now. And if Scott could draw like crazy, I’d say he should still do what he does because there’s something about the simplicity that gives it a bluntness—almost like a kid drew it. The things I laugh at are when somebody passes me a note with a stick figure. There’s something about the crudity of it that is immediate and direct. So that’s never been an issue for me with something like Dilbert. It just makes me laugh. I’m not in it to be wowed by what somebody can do with their pen.

PK: It seems like the cartoonists coming up are not really getting into the art all that much.

PK: I love the way Zippy is drawn, but I hardly ever find myself busting a gut over it. Inward chuckling yes, outward guffaws, no.

SP: I admire him tremendously because in an age when most comics just absolutely suck, not because they are untalented, but because they take no chances. They take no risks. They give you family humor. They give you the jokes about how coffee makes you really wide-awake in the morning; how Mondays are bad; how Johnny did something bad today. It’s just so boring that anytime someone like Bill Griffith comes along and says, “I’m going to do my thing, you can follow me or not follow me, but it’s my thing. And if you don’t understand it, I’m sorry, but this is what I do,” I love that.

PK: Have you ever been censored?

SP: They did one last week where Pig and Rat have a new neighbor, somebody famous. He moved in to the house across the street. The pig makes a welcome basket of fruit and bagels for him. And he goes over and then all you see is off panel somebody screaming at him: “Bagels?! Are you a Jew? Don’t you know Jews cause all the wars in the world?” No more bagels for that guy. I thought that was just sort of funny. That would have run this week. And they said that’s just too big of a risk. So I’ll put it in the book. I turned one in where the characters in the last panel end up in this box called the “end of the world box” where they wear little beer helmets, where you sip them out of a straw. They asked if the beer could be changed to cookies. And I couldn’t believe it because I’ve shown beer 100 times. So I hope that’s not the start of some new weird trend. But that is very rare.

PK: So how did you respond?

SP: I said forget it. Don’t even call. By and large, I can run what I want to run, and uncool though it may be, I’m the one who stops me.

PK: When you get an animated TV special, who will voice Rat and Pig?

SP: I hear Rat as sort of a Denis Leary voice. Pig I hear as—he’s no longer living of course—John Candy. Particularly the John Candy that was in the Chevy Chase movie Vacation, when at the end of the ordeal, they get to that amusement park, and John Candy walks out and says, “Hello kids, how are you? Welcome to Wally World.”

PK: Are there any living people who could do Pig?

SP: Somebody with a fat-sounding voice.

PK: Horatio Sanz? He could be Pig.

SP: Oh, I love that guy. I’m going to suggest that. Goat I hear as just sort of myself. I’m just arrogant enough to want that.

PK: What do you listen to while you’re doing your cartoon?

SP: I have on my iPod a thing called “writing list” and it’s songs I can write to and there are about 400 of ’em. And every time I write that is blaring in my ears. I don’t think I’ve ever written a strip where I didn’t have music. Maybe I should write without it more. My most popular strip that I’ve ever done was called The Box of Stupid People, which was in the first treasury. That was written right there in the Berkeley Rose Garden and there was no music playing, so I maybe I should turn the music off. The music makes it impossible for the left brain to concentrate therefore you’re not consciously writing, you’re intuitively writing. So my theory is you kick out half the brain and you write with that other part. My newest theory. I could be totally full of crap.
____________ 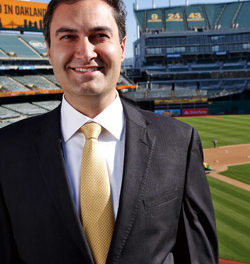 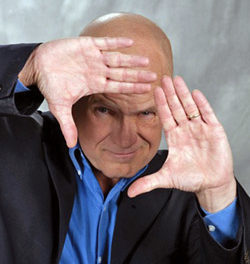 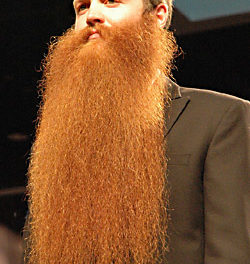 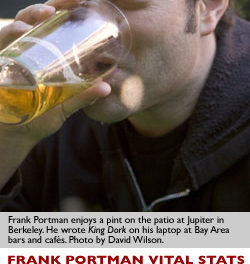