J. Ross Browne was one of those colorful, larger-than-life characters who was always adventuring, exploring, and writing witty prose to document all the excitement. Born in Ireland, Browne came to the United States when he was 11 years old, and just 10 years later, was off on a whaling ship. Barely in his twenties, he witnessed the drama of hunting whales on the high seas. It is said that his book Etchings of a Whaling Cruise (1846) influenced Herman Melville in the writing of Moby Dick. He’s also credited with inspiring Mark Twain and Edgar Allan Poe: not bad for a guy most people haven’t heard of.

Browne came out to California in the very auspicious year of 1849. He was dispatched to keep sailors from abandoning ship in San Francisco harbor to race off to the gold fields. (Good luck with that.) Hundreds of ships were left to rot where today’s infill-created Embarcadero stands. He also was involved in establishing post offices in California and recording the minutes of the Constitutional Convention of Monterey, which formed the state government in 1849. He traveled and wrote widely, and often his etchings served as illustration. He was an expert on mining and Native-American relations. Just to put the cherry on the big personality sundae, he also served as ambassador to China and uncovered malfeasance of his predecessor.

Browne also had an interesting encounter with survivors of that very iconic disaster of the winter of 1846-47, the Donner Party.

Where Oaklanders now drive to ski, comfortably outfitted in parkas, GoreTex, and L.L. Bean boots, travelers (called “emigrants,” since California wasn’t yet part of the United States—that’s why the passage just before reaching Truckee is called Emigrant Gap) stalled just before crossing the Sierra. Snow fell early that year and with great ferocity. Realizing they would have to wait until spring to cross the range, the emigrants found shelter around the edge of what is now Donner Lake.

One cabin already existed, roofless, and several other structures were quickly thrown together, one using a large boulder as a wall. Several miles away, emigrants who had been stranded apart from the others built their own very temporary and rudimentary branch shelters. In all, nearly 90 people tried to live through a stormy winter with urgently cold conditions and few provisions. Snow fell and buried their livestock—one of the more pitiful details of the ordeal involves the emigrants walking the snow with a long pike, trying to locate the frozen carcasses lost below.

Ultimately, food gave out. The Donner Party is infamous for resorting to cannibalizing the dead, although not all did, and the choice to do so was clearly fueled by reluctant desperation.

Out of 87 emigrants, only 48 lived, and only two families survived intact with all members. The Patrick Breen family (with seven children) was one of them. Perhaps not surprisingly given their survival percentages, they had taken the pre-existing cabin with its best shelter from the wind and snow. If you visit the Emigrant Trail Museum, the large bronze statue—cast by the De Rome Foundry of Oakland—is supposed to be on the site of the Breen cabin, although that has been disputed. Patrick Breen’s diary is the foremost primary source from the Donner Party experience. 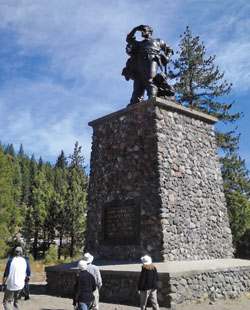 The emigrants took months to get across the United States, but when the Visitor Center at Donner Memorial State Park moves, it’s just a trip across the parking lot. The building is ready, but no exhibits have been installed yet. Museum staff expect a spring opening of the new visitor center. The statue of representative emigrants at the Emigrant Trail Museum was built on the supposed site of the cabin where Breen and his family wintered, and the base purports to show the level of snowfall the winter of 1846-47. It was forged at the DeRome Foundry in Oakland. Photo by Erika Mailman

After the nightmare, the Breens settled in San Juan Bautista where they—quite implausibly—ran an inn. Possibly better than a restaurant, but not a great choice for people known for consorting with cannibals. Here’s where J. Ross Browne enters the story. While on his route as postal inspector, he spent the night at their inn and wrote up the experience for Harper’s New Monthly Magazine in 1862.

He didn’t name the Breens, but the reference was clearly understood. His description of Margaret Breen set the stage for the unpleasant night: “She struck me as an uncommon person—tall, raw-boned, sharp, and masculine—with a wild and piercing expression of eye, and a smile singularly startling and unfeminine. I even fancied that her teeth were long and pointed, and that she resembled a picture of an Ogress I had seen when I was a child.” Patrick Breen fares somewhat better: He’s reported as being melancholy and showing the signs of past trouble without “the strong power of recuperation so common among American adventurers in California.”

As the men spoke, Breen volunteered the information that he had been part of the Donner Party. Browne held the belief that Mrs. Breen had tasted of human flesh while her husband had not, and thus his initial unfavorable impression of her was magnified. He was unable to look at her without shuddering. “Her very smile struck me as the gloating expression of a cannibal over human blood,” he wrote.

Perhaps predictably, when Browne sat down to supper, Margaret Breen was the one to pass him a platter of meat. Although he was quite hungry, he was unable to choke it down. Nor could he eat bread, seemingly innocuous, since “it was probably made by her hands—the same hands that had torn the flesh from a corpse and passed the reeking shreds to her mouth.”

Upon retiring, Browne found his room to be “filthy” and the furniture “slatternly”. . . and sleep hard to come by. “Whether owing to the vermin, or an unfounded suspicion that she might become hungry during the night, I slept but little,” said Browne. When he did fall asleep, he dreamt of the Ogress face intermingled with Mrs. Breen’s.

Donner Party historian Kristin Johnson points out that, “The most striking thing about Browne’s visit to the inn is that the Breens themselves did nothing out of the ordinary. Browne believed he was in the presence of a cannibal and spent a miserable night because his imagination got the better of him.” He built an entire magazine article solely out of his emotions of discomfort. Browne’s frequent contributions to Harper’s were “greatly instrumental in the success of that periodical,” reported his obituary in the Pacific Rural Press. The article about the Breens is reprinted in Johnson’s anthology of Donner Party narratives, Unfortunate Emigrants.

Interested in a road trip? You can visit the inn. The Castro House in San Juan Bautista was owned by the Breen family and succeeding generations from 1848 to 1935. It’s now a state historic park, furnished as it was in the 1870s, directly across the street from the Mission.

As for Browne, after he escaped the murderous clutches of Mrs. Breen, he settled in Oakland in 1859. He first lived on Fifth Street. He began construction of his grand estate, Pagoda Hill, in 1870, between today’s Chabot and Harwood roads in the Rockridge neighborhood.

In keeping with his worldwide travels, the home combined the architectural styles of Gothic, Moorish, Chinese, Indian, Italian, and Russian (which was also said to be the crazy amalgam of Uptown’s Fox Theater as well). According to his letters as quoted in Barbara Lekisch’s Embracing Scenes about Lake Tahoe and Donner, Browne referred to his home as “without regard to unity of design or the laws of taste—a cupola from Moscow here; a Chinese gateway there; a Moorish dome on a French roof; a Saracenic belfry and a Japanese temple—all tossed together in the strangest manner, like the vagaries of a traveler’s dream.”

Much like the sprawl of Joaquin Miller’s cabins in the Oakland hills, Browne’s estate included scattered homes for family members. With his wife Lucy A. Mitchell, he had around 10 children (reports vary as to the exact number). The wayfarer died in 1875 of appendicitis that struck on the ferry ride home from San Francisco. Too sick to make it back to Rockridge, he lodged with a friend on the estuary and died that night at age 54. He is buried at Mountain View Cemetery.

Pagoda Hill was torn down in the 1920s to make way for development, says Oakland History Room librarian Kathleen DiGiovanni. She has previously written about Browne for the Oakland Heritage Alliance’s News. She says, “Browne is such a fascinating and under-appreciated figure in Oakland—and California—history.”

Although his name has largely been lost to time, his choice of Oakland for his home still feels complimentary. As the 1886 Centennial Yearbook of Alameda County said, “Oaklanders will ever refer to [Browne] with pride and pleasure, for after traveling all lands, looking out for an Eden of his own, he selected this spot as the one most in conformity with his ideal.”

Verbatim: A sample of Browne’s writing.

Browne’s tongue was often lodged firmly in cheek. Here’s a charming excerpt from his travelogue The Land of Thor:

In Germany I had seen a few cases of stupefaction arising from overdoses of beer; in France the red nose of the bon vivant is not uncommon; in England some muddled heads are to be found; and in Scotland there are temperance societies enough to give rise to the suspicion that there is a cause for them; but, generally speaking, the sight of an intoxicated man is somewhat rare in the principal cities of the Continent. It will, therefore, be conceded that there was something very congenial in the spectacle that greeted me on the very first day of my arrival in Moscow. A great giant of a Mujik, with a ferocious beard and the general aspect of a wild beast, came toward me with a heel and a lurch to port that was very expressive of his condition. As he staggered up and tried to balance himself, he blurted out some unmeaning twaddle in his native language which I took to be a species of greeting. His expression was absolutely inspiring—the great bleary eyes rolling foolishly in his head; his tongue lolling helplessly from his mouth; his under jaw hanging down; his greasy cap hung on one side on a tuft of dirty hair—all so familiar, so characteristic of something I had seen before! Where could it have been? What potent spell was there about this fellow to attract me? In what was it that I, an ambassador from Washoe, a citizen of California, a resident of Oakland, could thus be drawn toward this hideous wretch? A word in your ear, reader. It was all the effect of association! The unbidden tears flowed to my eyes as I caught a whiff of the fellow’s breath. It was so like the free-lunch breaths of San Francisco, and even suggested thoughts of the Legislative Assembly in Sacramento.

————
Erika Mailman is a historical novelist who plans a Donner-related sequel to her novel Woman of Ill Fame. 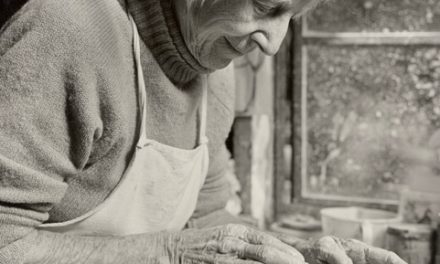