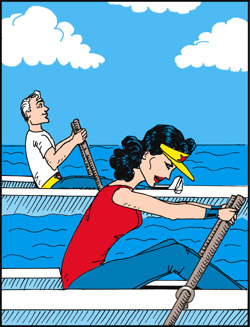 A peaceful day on the lake awakens unexpected emotions.

There are four of us in the beginning rowing class: a couple of 20-something women, a tall, athletic-looking middle-aged guy, and me, an out-of-shape, 41-year-old mother of three. We’ve all come to Lake Merritt to learn to scull, a sport that involves rowing a puny, unstable boat backwards. I just discovered rowing a month ago and have latched onto it as the perfect way to get some gentle, low-impact exercise.

My classmates and I spend an hour learning the basics of the stroke on rowing machines, then tentatively climb into our tippy little sculling boats and make our way out onto the lake, which is empty except for the lines of buoys set up for a thousand-meter rowing race next week. Our teacher tells us to pick a lane and practice rowing straight. It’s a lazy, sunny Saturday, with geese flying overhead and joggers circling the lake’s perimeter.

I find my way into a lane and start rowing slowly, trying to get the hang of controlling my oars and crossing my hands over each other at the midpoint of the stroke. Going straight turns out to be harder than it sounds; you have to make both oars do the same thing at the same time, when the oars have no such inclination. Plus, since you’re sitting backwards, you have to keep looking over your shoulder every few strokes to make sure you don’t ram anything.

After awhile, I look up to see where my classmates are. One of the women is behind me and to the left, turning circles in her lane and muttering. I can’t see where the other woman ended up. The tall middle-aged guy is rowing fairly well in the lane next to me. He happens to look over and catch my eye, and we exchange a nod. He quickly goes back to rowing and pulls away from me. Hmmm.

I start rowing with a little more energy; no reason to get left behind. As I catch up to him, he looks at me, and I swear he raises an eyebrow. Then he leans forward and starts pulling harder. Is he actually trying to get ahead of me? I don’t think so, buddy. I kick it up a notch.

I’m keeping pace with him now, surreptitiously checking his boat position every few strokes. I increase my power to pass him, but he comes right back. Then—damn! Tall Middle-Aged Guy takes the lead and starts moving away from me again. This is totally unacceptable. I have no intention of letting him get to the end of the course first. Giving up all pretense of casual rowing, I pull as hard as I can.

It’s not pretty. It turns out that I can’t pull hard and go straight at the same time. My boat smacks into a buoy on one side of the lane, and I frantically jam the opposite oar into the water to turn it. Lurching around, the boat heads straight toward a buoy on the other side of the lane. My wake looks like a big sine wave. I’m whacking my knuckles against each other with every other stroke, and my left oar keeps getting stuck in the water, causing the boat to dip precariously—but do I slow down and rebalance? No, I do not. I will flip this damn boat before I let Tall Middle-Aged Guy get farther ahead of me.

I manage to catch up to him again, and some little reward center in my brain lights up like a pinball machine. You want a piece of me, big guy? Do ya? Do ya? I can’t hear anything over the sounds of my own wheezing, but I can see that Tall Middle-Aged Guy is gratifyingly sweaty.

Our bows are side by side when we finally pass the last buoy, and I stop rowing. This has been the longest thousand meters of my life. I’m exhausted and shaky, but feeling smug. If I were a horse I’d toss my head back and whinny. This guy issued a challenge, and I met it.

I have, however, paid a price. In my desperate attempt to keep up with him, I recruited a surprisingly wide range of muscles—including, apparently, a few around my eyeballs. I now have a nasty facial tic.

Tall Middle-Aged Guy has stopped rowing, too, and now that I look at him closely, he doesn’t actually seem to be winded. In fact, though he’s a little sweaty, he has the demeanor of a man who’s just finished filing his nails. A small kernel of doubt about what just happened here forms in my mind.

Awkwardly, we turn our boats around to head back to the dock. He pulls up close and shoots me a friendly smile. “It’s so peaceful out here on the water, isn’t it?” he says.

I try to control my breathing enough to answer him.

——————————————
Jennifer Eyre White is an engineer and writer who lives in the East Bay. She fell hopelessly in love with rowing, joined a crew, and almost made it to her first real race before a back injury ended her promising middle-aged rowing career. You can find her online at www.HavingThreeKids.com. 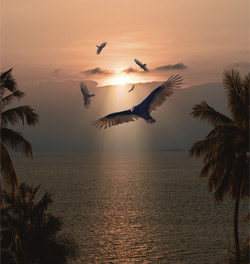 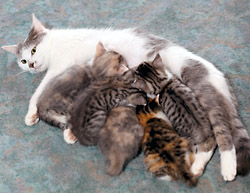 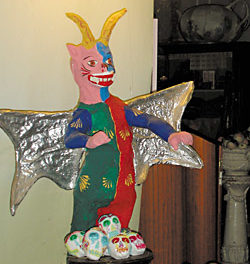 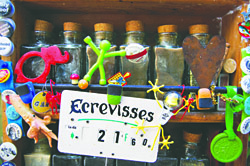