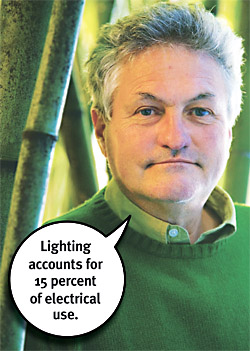 How to clean up your act without going bananas.

Complying with the rules of the ever-evolving, enviro/green/save-the-world movement can be more than a tad overwhelming. As with many complicated challenges, we quickly reach the exasperation threshold, rebury our heads in the sand, and return to familiar practices. Like not composting.

Fortunately, transforming yourself into a full-fledged Mr. Green Jeans doesn’t have to be traumatic. It simply takes a one-step-at-a-time philosophy, much like what’s required for weight loss. Time and again, it’s been shown that setting out to shed a modest amount of weight over time (say a half-pound a week) is far more successful in the long run than going on that all-smoothie crash diet. Sure, the pounds fly off, eliciting comparisons to Kate Moss—even among males—but it won’t last. No one can subsist solely on smoothies, and once the Jumbo-Jack train is re-boarded, the spare tire magically re-appears.

Similarly, attempts to go green often begin with grand visions of slapping solar panels on the roof, buying a new hybrid, and eating only food grown with-in a 90-mile radius, in season—all well-intentioned goals, but for many neither practical nor affordable on an everyday basis.

But don’t just buy this line of reasoning from a lowly freelance writer with a little too much time on his hands. There are bona fide experts on this subject, you know. 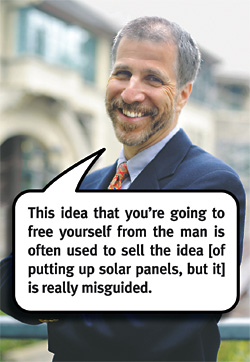 The first place the average Josephine can be more environmentally conscious is around the ole homestead. To fully take stock of what’s needed for a green home makeover, I defer to Bob Schildgen, known to readers of Sierra, the Sierra Club’s magazine, and radio listeners as the PC pundit of Ask Mr. Green renown. A former editor of the Co-Op (remember those?) News, Schildgen joined forces with the Sierra Club eight years ago to meticulously research reader questions about everyday environmental concerns.

I meet up with Schildgen at his tidy orange house in the Berkeley flatlands. Fresh from tending a compost pile in the backyard that features a rabbit whose cage sits directly above the fragrant mound, allowing it to make regular, pellet-sized contributions, he answers the door in jeans and bare feet. He’s also wearing a T-shirt featuring the visage of El Salvador’s Archbishop Oscar Romero, who was famously assassinated during a service in 1980 while speaking out against government repression. “Being an environmentalist is a lot like being a martyr,” explains Schildgen.

Armed with my laundry list of enviro-concerns, I ask him to illuminate, naturally, lighting. In my household I’m known as the kilowatt-saving Nazi, flitting from unoccupied room to unoccupied room turning off lights that have presumably been left on for the benefit of spirits. But is this effort conserving a significant amount of electricity—or am I just driving myself crazy?

“Lighting accounts for 15 percent of electrical use,” Schildgen says. “That’s a huge chunk” of the average California household’s 1,200-kilowatt-hour consumption each year. With an average kilowatt-hour costing about 14 cents (during nonpeak times), the hours upon hours that lights are left on unnecessarily can really add up, affecting both pocketbook and environment. “Do the math,” advises Schildgen. I do. Advantage Kilduff. 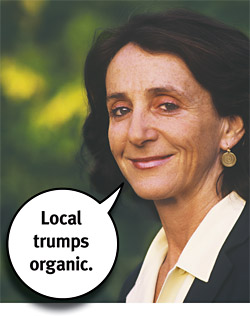 Next up: diapers. Anyone who’s ever dealt with the disposable genre can appreciate the sheer volume of the little devils headed to the landfill. Supposedly, when entombed in a dump, the diapers’ toxic methane is even worse for the ozone layer than when first emitted.

Given these factors, it’s a no-brainer that Schildgen recommends cloth diapers—although not for the reason you’d expect. Since methane in landfills can now be captured and used to power electric plants (a widespread practice in Germany, Sweden, and other countries as well as New Jersey, New York, and Connecticut), soiled Huggies aren’t necessarily the evil they once were.

Of course, a factor against cloth is the amount of energy and water used to wash them over and over again.

For Schildgen, it’s more of a psychological issue. “Why should our infants’ most intimate experience be with the throwaway culture?” he asks.

Awfully hard to counter that, so deftly I change the topic. What about the burning question at the core of our mindless consumer culture: paper or plastic? 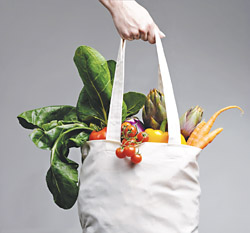 While many of us assume that paper bags make preferable totes because they decompose, Schildgen says otherwise. That’s because in today’s tightly packed landfills the lack of oxygen prevents the paper bags from breaking down. “Plastic’s better in the long run,” he reasons; it saves trees. That far outweighs the energy used to make petroleum-based plastic bags (that, admittedly, probably won’t break down in the landfill any more easily than paper).

But for Schildgen, who personally eschews both paper and plastic, the conundrum actually cuts deeper. “We’re worrying about the plastic bag?” he says. “Worry about the car. We use more petrochemical resources just driving a mile to the supermarket.”

Yes, you guessed right—Schildgen also does not own a car. And what he would like to see is the widespread use of legs, public transport, and bikes to get to the super—all while lugging well-worn canvas bags, as he does.

For most of us, though, driving everywhere for everything is a given. Add to that the sprawling layout of modern cities—even parts of Berkeley, where a jaunt to any store on foot from, say, Grizzly Peak Boulevard would be prohibitively time-consuming, if not actually ill-advised—and no wonder we are chained to our steering wheels.

But what kind of vehicle should the eco-conscious citizen choose? Many of us assume that the greenest option would be a hybrid that gets 40-plus miles per gallon. However, considering the energy used to create that spanking new Toyota Prius or its look-alike, the Honda Insight, maybe we should think again.

For answers I call on Cal’s go-to energy policy guy, Severin Borenstein, director of the school’s Energy Institute and an economist at the Haas School of Business. Borenstein drives an Insight. And in his view, it’s important to distinguish between saving money and saving the environment. Translation: If you can afford to, buy a hybrid (new Priuses start at about $25K). But for about $3,000 less, a VW Jetta diesel gets the same 40-plus miles per gallon. Even stingier would be to procure a used gas-sipper on Craigslist. But beware: That three-cylinder Chevy Sprint hatchback from the 1980s also puts out far more tailpipe emissions than today’s rigs.

“New cars in general do well on ambient air pollution,” says Borenstein, referring to the pollution caused by the volatile organic compounds spewed from tailpipes. “But in terms of greenhouse gases [which include carbon dioxide and methane], that’s just a fixed ratio to how much gasoline you use. So if you can get twice as good gas mileage, you’re going to put out half as much greenhouse gases. Hybrids are quite good at that, but they’re not the only ones.”

Outside of tooling around in a hybrid, nothing bolsters enviro street cred like installing solar panels. For heavy users of electricity, Borenstein says, solar panels make sense. However, for the same reason we don’t tend to grow our own corn or make our own shoes, solar panels are simply not cost-effective.

“This idea that you’re going to free yourself from the man [i.e. PG&E] is often used to sell the idea [of putting up solar panels, but it] is really misguided,” says Borenstein. “First of all, you’re not. You’re still going to be hooked up to the utility and need the utility because your solar panels are not going to generate all the time.

“So the question is, does it privately make sense for you or is it helping the world?”

The answer, says Borenstein, is that going solar in most cases only really helps the individual homeowner. How can that be? Consider the numbers. Utilities charge as much as 35 cents a kilowatt-hour for heavy users when it really only costs them about 8 cents a kilowatt-hour to send that power. This discrepancy is due to overhead charges being passed on to the consumer—a common business practice. “Someone still has to pay those [overhead costs], so we end up with higher rates overall as people install solar in order to avoid those high charges,” he says.

In other words, when you install solar panels you are merely passing along the burden of these high overhead costs to other ratepayers. So, instead of sticking it to the man, you’re sticking it to your neighbors. Ouch.

Perhaps the most green decision people make on a regular basis has to do with food. Should every morsel entering the pie hole come from a plot tended by Tibetan monks on the outskirts of town? Maybe so, but even Whole Foods would have a hard time providing that experience.

The hypotheticals with this topic are endless, so let’s consider another conundrum. What if you’re faced with choosing between a locally produced, non-organic tomato versus a certified organic (grown without chemical pesticides) specimen trucked in from miles away?

“Local trumps organic,” says Sibella Kraus, albeit with a reluctant twinge in her voice. Kraus is director of Sustainable Agriculture Education (SAGE), a Berkeley-based nonprofit that advocates for sustainable farming practices and runs a farm in Sunol. She would much rather see both local and organic foods consumed. Given the planet’s current energy circumstances her vision just may be the future.

Whether Kraus’s vision for a “greener” future turns into reality, undoubtedly the small steps many are already taking will continue to be a catalyst—like shopping at farmers markets for local produce, riding your bike to the store, and hanging clothes up to dry.

These cheap and quick lifestyle tweaks aren’t glamorous, but they do make a difference. Imagine if they became the norm—Mother Earth, and your pocketbook, would be eternally grateful.

————
Would-be food and culture snob Paul Kilduff is the sub-genius behind the immensely popular Kilduff File empire. He is available for weddings and bar mitzvahs.

1. Turn all lights off when not in use, and replace incandescent bulbs with fluorescent or LEDs.

2. Set thermostat at 68 degrees. Turn heat down to 55 or 60 when out of the house or going to bed. If you have a programmable thermostat, set it to do this automatically.

4. Use a clothesline to dry clothes.

5. Do laundry with cold water.

6. Use backpacks and canvas or other non-throwaway bags for grocery and other shopping.

7. Do only full loads in dishwasher and washing machine.

10. Compost your food waste or put it in compost bins for collection.

11. Open curtains on winter days to take advantage of solar energy. Close them at night to retain heat.

12. Set computers to go into “sleep” mode within a short time period. Turn off power strips when computers, CD players, and other electronic devices are not in use. 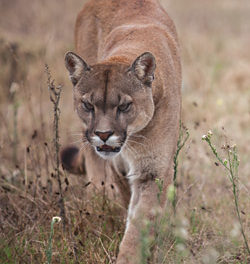 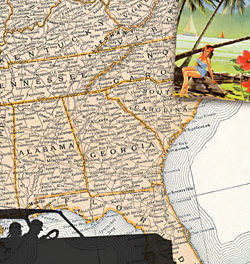 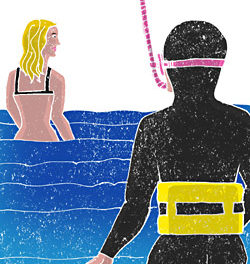 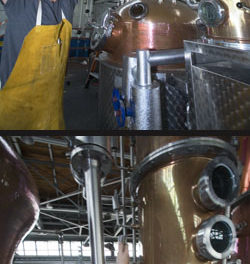