Dining Off the Grid 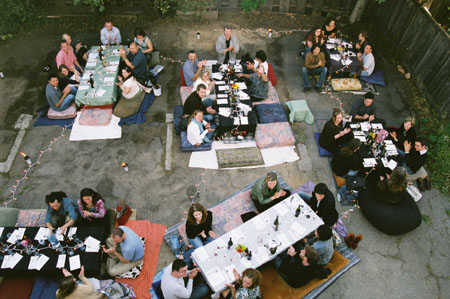 A movement of movable feasts, secret supper clubs and artistic speakeasies sates the desires of the culinary crowd.

A culinary wildfire of supper clubs is burning through the Bay Area. It’s underground, a network of secret feasts built by a radical corps of chefs. Major players like the Ghetto Gourmet, a. Muse gallery and Hidden Kitchen are widely credited with ushering in a hip wave of privately organized banquets for groups as intimate as 10 up to massive gatherings of hundreds of haute cuisine fanatics. Often promoted by word-of-mouth or by invitation-only, the parties vary widely in their format, with artists and chefs striking up business and creative partnerships and sharing one singular, unflagging allegiance: the love of fine fare, and all of it seasonal, local, organic and fresher than dawn itself.

It’s no surprise that these parties are multiplying like the names on their guest lists. According to Leif Hedendal, a self-educated chef who cut his teeth on the produce at Mercat de la Boqueria in Barcelona before returning here to cook under an exiled Tibetan monk named Tenzin and then at such establishments as Greens and Citron, the revolutionary spirit and food focus of clandestine, underground dining events appeals to the Slow Food movement that has become virtually synonymous with the Bay Area. And Hedendal speaks for a number of political chefs when he says these invite-only events are explicitly about functioning “outside the everyday milieus of economic exchange.”

Looking very much the quintessential indie in a threadbare ringer tee and flip-flops, Hedendal comes off as soft-spoken and mellow as he prepares ginger-sichimi tofu, drunken morels, and sea palm with ume before the hip throngs at the a. Muse gallery on Florida Street in the Outer Mission. Ask him about the rationale of speakeasy cookery, however, and he becomes instantly fierce and clear. They’re “alternatives to the restaurant industry and its ultra-capitalist, ultra-exploitative, ultra-wasteful trappings,” he says. 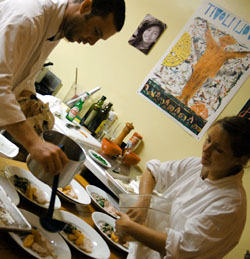 Speakeasies, in his view, with committed foodies gathered to eat and discuss his meals, present him with a direct opportunity to talk about health, permaculture and sustainability. It’s work he can do with food and people without having to participate in the profit-driven hospitality infrastructure.

Monica Way, a Bay Area native who has hosted her own private seasonal suppers for several years now, believes these parties represent nothing less than a new culinary zeitgeist. “I think I realized at a certain point that I no longer needed to accept the gospel from every dining guide on the rack,” says Way, sitting on the slate stoop of her sprawling Westbrae Craftsman in Berkeley. “It’s like a return to the commons, about making room, knowing that the food we grow over in the community garden can be harvested, walked the few blocks home, prepared and shared with neighbors.”

Such a genuine piazza experience is enough to tempt any foodie with a discerning palate and an avid interest in breaking bread, but what’s interesting is that professional chefs (including celebrity chefs) from restaurants like Chez Panisse, Eccolo, Mecca and Le Zinc have been drawn into this movement of renegade restaurateurs. Such events lack all the benefits of the well-oiled machines that constitute the Gourmet Ghetto establishment—the safety net of health department inspections, state certification, and in most cases, a permanent location. So what’s in it for them?

Enter the artistic speakeasy. The opportunities at these speakeasies represent independent forums in which chefs can run their own show without the massive overhead expense of a fully licensed establishment with all the necessary permits, benefits and infrastructure.

But there’s more momentum to this movement than the radicalization of the foodie phenomenon. In fact, mainstream chefs working in the San Francisco Bay Area may have even more cause to encourage such experimentation than the kitchen mutineers do. While San Francisco’s recent minimum-wage increase and the introduction of additional health-care requirements represent a boon for local restaurant workers in general, the changes leave fewer restaurateurs with enough capital to open establishments of their own.

“When we started, there seemed to be very little going on in terms of open, social community and alternative dining experiences,” says Townsend, who is something of a godfather to the movement and has hosted events not only in homes, but on farms, at museums and even in parking lots. “Today, we’re following at least 45 projects and businesses worldwide that are using the Internet to get people together in interesting ways to break bread.”

Part of this success can be attributed to the unusual networking prospects of such large-scale art parties among dedicated foodies, whether for brand-building, pickup work or just plain old recipe exchanges; the crowd is bigger and much more informed, respectively, than patrons a chef may encounter in either private-chef work or catering.

Some of these events function outside of the law—bypassing, for example, the requirements for food-handling procedures, state certifications, mandatory supervisors and properly maintained commercial equipment. “I never thought of what we do as being that illegal—we get culinary professionals to cook for willing, adventurous adults in interesting places,” says Townsend. Ultimately, he adds, “projects like the Ghetto Gourmet will grow to be viable alternatives to restaurant dining, and both the businesses that provide them and the laws that regulate them will have to evolve to meet a growing demand.”

Proving equally amenable to the trend of artistic speakeasies, local artists are opening their homes to these off-the-books events. Lori Shantzis, gallery owner, and the operational hub of a. Muse, one of the Bay Area’s most lauded artistic speakeasies, sees the dinners as a natural fit for creative types, in the spirit of salons hosted by Gertrude Stein and Alice B. Toklas. She hosts these parties because she believes that culinary arts are yet another branch of art that deserves exhibition space. “To me, a chef is as much of an artist as any other,” says Shantzis, looking Mission-chic in a baby-doll dress and Barbarella platforms as she presides over an intimate dinner for 40. Shantzis keeps the bounds of her San Francisco gallery space intentionally broad, claiming to identify with any art that “bring[s] out the beauty in something, whether it be a nectarine, a piece of wood or colors on a canvas.”

Shantzis says, “This concept of underground dining is only unique to countries where there is such a strong concentration on profit.” Her ongoing inspiration, in fact, remains the communal dinners she attended in Tuscany years prior to attending her first Ghetto Gourmet event.

She is not, however, so earnest about social statements of art, food and community that she can’t have a little fun mixing them up in her particular style. She recalls with a certain fondness “the Sexy Strut dinner when guests ate appetizers off of live models wearing very little but Saran Wrap.”

Health ordinances be damned because, really, given the choice, who’d lick the salsa off a plate when one might enjoy it on a performance artist instead?

As host and hub, she plays the raconteur, draping herself over a knock-off Vitra chair in the lounge while young women wind their way among tables in the capacious live/work space and drop heirloom cherry tomatoes, each injected with musty balsamic vinegar, into the mouths of every eager guest. In the open kitchen, a dozen volunteers bustle—one more sunny and stylish than the next—to prep and plate the next course. They bring jeweled basmati to the tables—bright, fragrant rice studded with barberry, tonka beans, pistachio nuts and orange blossoms, each flavor asserting itself like a small flare.

Lissa Ivy, an experimental foodie and Bay Area performance artist, has traveled from Davis to pay her $40 for the seven-course stretch. She, like many attendees, has begun her own innovative food and art projects at home, hers being a series of local “tree house sandwich parties,” performance pieces that involve interactive performance art, live DJs and homemade, homegrown food, all calling into question the distance people live and work from the food they eat. Ivy hopes to address areas where local production, distribution and consumption can improve.

Zoey Kroll gets this. Dressed in green soft wool and freckled like a farm girl, Kroll is busy scribbling her name and number on a napkin for another attendee, an unofficial invite to a tasting of the 10 types of uncommon arugula she’s grown in what she calls her “edible office.”

For the amateur foodie like Ivy or Kroll, an artistic speakeasy—meeting a loft full of foodies all at once, learning where they shop (Le Sanctuaire), which magazines they read (Saveur), the projects they’ve mastered (Persian fesenjan), new ones they’re trying (homemade sauerkraut)—affords the hungry amateur an immersion into a rich culinary community without the $43,000-plus it costs to attend a local culinary academy for a single year. And with the leveled playing field of culinary blogging, it’s very possible that this room holds the top critics of the future, not a set of classically trained, stringent and isolated snobs like the one parodied as “The Grim Eater” in Pixar’s Ratatouille, but the human miscellany, the chatty-Cathy food-freak hell-bent on finding the newest, the freshest, the most local fare feasible.

Chances are you will never find the Ghetto Gourmet in Zagat’s or a. Muse in the pages of the Chowhound’s Guide to San Francisco, but odds are you know somebody who’s been to one of these events.

——————————————
Elizabeth Kennedy is a freelance writer living in Oakland. Keep up with her at elizabethkennedy.org. 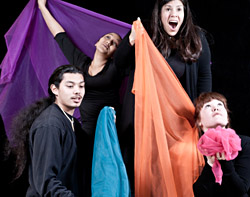 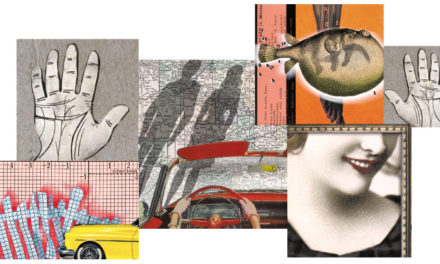 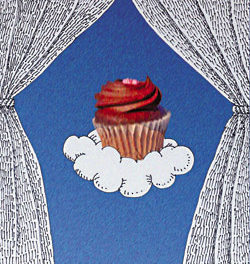 A Walker on Piedmont Avenue 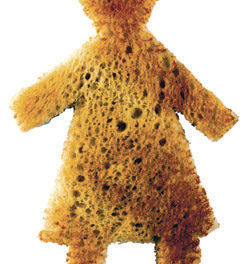