Faro Meets the “Little Troublemaker” for the First Time 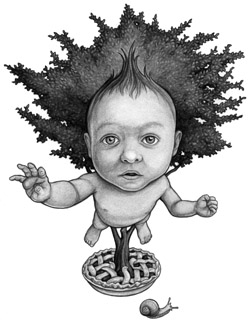 The adults make plans for mulberry pie day this summer while the tree urges persist and bear fruit.

Lily picked me up at the train station. John, her husband, had arrived home from work in time to mind their infant son. This would be my first viewing of the newborn. Lily had a difficult pregnancy that warranted inducing labor a full month before the due date. The “little troublemaker,” as I called him, arrived in this sunlit world at around 6 pounds with, according to his father, a look of shock on his face. Hey, this was not the plan.

Now, two months after that seismic event, he is still tiny, asleep on a lozenge of mattress on John’s lap when we arrive at the house. Due either to our voices or some internal summons, he stirs and his eyes open, violet irises surrounded by a corona of pure white.

Tycho. Named after Tycho Brahe, the 16th-century Danish astronomer whose precise measurements of the movements of the celestial spheres, done without a telescope, confirmed the Copernican theory that the solar system is heliocentric. John is an avid amateur astronomer and has a mini-observatory in the backyard.

“Would you like to hold him?” Lily asks. John hands him over.

In transit Tycho stirs. Upon arriving in my big gardener’s hands, there is a look of alarm in his eyes. Hey, whose idea is this? Lily tells me that according to child development timetables, he’s still not able to recognize faces, but I wonder. He kicks away the tiny blanket every time I cover his bare legs. What incredible toes. His body is all doughboy except for a heavy head poorly supported by his beginner’s spine. “Big head for a big brain,” John says, and the little astronomer stretches in four directions, as if eager to escape the coil of gravity. On the other hand, maybe it’s a baby’s way of waving hurrah, here at last.

I try to anticipate his every whim regarding being held, worried that I am manhandling him in every sense. All for naught; squirms become squalls. A bottle is proffered. Appeased, he settles into the crook of my arm contentedly sucking. I hold the nipple between his toothless gums and he ingests. The moment is intensely fascinating, his mighty urge, the unclouded need. It opens a window within me upon a corresponding tenderness, a transcendent kinship. The milk level goes down quickly. His comparatively long fingers lightly grip my thumb.

Those who study the stars have God for a teacher.
—Tycho Brahe

Those who study the earth do likewise.

Two summers ago, John and Lily moved into this house in Concord. One Saturday, I helped them tackle the overgrowth of their backyard and was delighted to discover a huge mulberry tree decked with fruit along the back fence.

Few trees prosper in the take-no-prisoners climate of the High Plains where I was hatched, but mulberries did and reliably produced fruit. In retrospect, I wonder how they sidestepped the inevitable late frost. The apricot tree, the peach tree, and the apple trees almost always got zapped. We had three mulberry trees, two purples and a white, and so had jams and jellies, and best of all, mulberry pie every summer.

John and Lily had no history with mulberries, so the tree was a discovery, a presence that turned a weedy yard into a garden. We picked buckets of fruit and put them in our respective freezers. Later that summer, we made mulberry pie, laying the tracks of the mulberry tradition into their future, so I like to think.

People with taste suggest removing the stems but the tedious nature of this would turn a love affair sour. What’s the problem with a little texture?

“Last year we didn’t get many mulberries,” Lily says. “They kind of dried out. This year I bet will be better. There are lots on but they’re still green.”

I bet so, too, after a winter of “more rain than Seattle.” Everywhere you look, the leafy world is in glory. The blossoms on the apple trees in my garden were so gaudy I briefly thought a white clematis had climbed skyward. My garden each morning feels like a bath of beneficent aerosols, no matter how much anxiety the head is stuffed with. Aromatherapy for all comers, giving and forgiving. It makes me almost forget that from every scientific dispatch come dark warnings of doom and that despite them, our species continues to do its damnedest to sever the communal bonds.

“We’ll need to set up a summer mulberry pie day,” I say. We have a 25-year tradition of apple pie day in the fall, begun when Lily was of an age that her favorite part was throwing flour around.

“We’ll get Tycho going on it,” Lily says.

…human lives and tree lives are made, always, from relationship.
—From The Songs of Trees by David George Haskell

Lie in the hammock. Non-doing is a Buddhist precept. It’s not synonymous with doing nothing. Non-doing implies the perfection of things. Non-doing you notice how the world gets along just fine without you. How when you are gone it will continue to get along without you. Listen. You can practically hear the velvety leaves of the senecio sizzling with the operations of photosynthesis. Growing like mad. Already there is little evidence of the insults of a recent pruning.

Every thoughtful parent surely asks the question: What will be the world my child inherits? I don’t have children, so this is an abstract question for me, at least until I look down at the bundle of potential in the crook of my arm, squirming, not as vigorously as before, having made his accommodations to the stranger and enjoying, if that can be said, a full belly.

What do we do? We make our small or large choices to do better. We better get on it. Our discarded toothbrushes are piling up on beaches in the tropics. “Many documented species have already disappeared — to take the example of Hawaiian tree snails, Achatinella apexfulva is just one of the hundreds of species that have been lost … ,” Elizabeth Kolbert writes in The New Yorker.

I do things. I stopped eating meat decades ago, easy in the Bay Area where choices are manifold. I take the bus as much as possible. I don’t use herbicides or pesticides more toxic than horticultural oil. If you see me using a blower, please shoot me. In the fall instead of bagging and disposing of ginkgo and maples leaves, I spread them around as mulch. It’s untidy for six months. Untidy, you heard it here first, is the new pristine.

These self-admired virtues are attended by the hypocrisies. I am traveling to Norway this summer for a birthday celebration. I am not taking the bus there. Look (don’t, please) at all the empty plastic bags and plastic pots and detritus of irrigation apparatus mounding in the storage shed. Yesterday, only yesterday, after using a particular “organic” fertilizer for years and paying through the nose (in both senses), I looked at the ingredients. Egad. Do I suppose the chickens gave up their feathers happily?

I don’t kill snails anymore. That’s a bump up the scale of compassionate behavior, don’t you think? The truth is, the promiscuous gastropods imported for gastronomic indulgence have mostly disappeared from my garden. Are they going extinct too? When I noticed an iridescent gloss on an andriscus leaf along with telltale lesions a few mornings ago, I felt a weird moment of relief. They’re back! Given a history of squishing, stomping, hurling, and cursing them, we’ll see how this holds up.

Nirvana means to blow out. The fires of desire extinguished. I’m nowhere near. What does the mulberry advise? Persist. Bear fruit.

Now the eyes of the stargazer open wide. Already his belly again sends its signals. Feed me or else. Here is how the world answers his innocent hunger: a bottle of warm milk. Slip the nipple in. There, there.

——————————————
R.E. Faro is a poet and essayist, and a longtime contributor to The Monthly. Read his blog at berrypicking.wordpress.com. 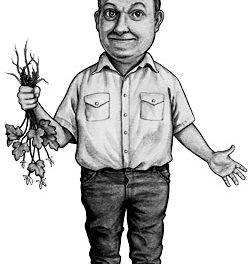 Out to Get Me 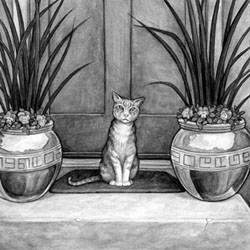 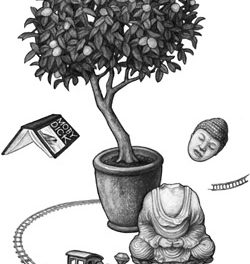 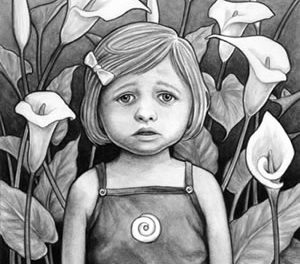 A Flower for All Occasions