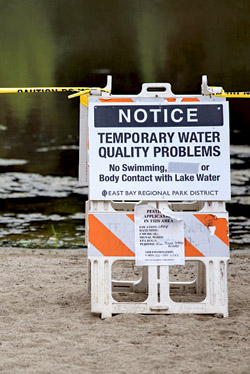 The popular lake has closed four consecutive years because of toxic algae blooms—an increasing problem found around the globe.

Ecological engineer Alex Horne recently visited Virginia and Brazil to try to understand what is causing blooms of odiferous—and potentially deadly—algae in local lakes, and what to do to fight them.

Now, the UC Berkeley professor is back at home, where the same blue-green algae affecting waterways around the world are proliferating in small local reservoirs. Oakland’s Lake Temescal, for one, was closed to swimming from late June until Aug. 12 due to the risk of ingesting the toxins sometimes produced by these algae. Lakes Temescal, Anza, and Del Valle are now under a cautionary advisory. Temescal, which historically has been popular with families from throughout the city, has experienced closures four consecutive summers due to toxic algae blooms.

“These algae have been around for billions of years and we have them to thank for giving us oxygen, so we have to give them some credit,” Horne said, adding that these organisms helped create environmental conditions that subsequently allowed more complex life forms, like plants and animals, to begin developing.

But blooms of blue-green algae, or cyanobacteria, now seem to be occurring more frequently—or at least with greater intensity—around the globe, Horne and other scientists say, and nobody is entirely certain why. Global warming has been cited by many as a likely cause of the phenomena. The drought, too, caused lakes to grow shallower and warmer—ideal conditions for harmful algal blooms, as scientists refer to them.

However, Horne isn’t convinced by either explanation—and there’s certainly more to these blooms than a warm climate. In artificial reservoirs, the slow but steady buildup of polluted sediment behind dams is one underlying problem. Sediment that enters lakes with tributary streams often brings with it phosphorus, which is essential for blue-green algae to thrive. Thus, lakes that have had time to accumulate deep layers of alluvial muck at the bottom become increasingly hospitable to algae, Horne said.

“Most of our reservoirs were built 50 or 60 years ago, and as they’ve gotten older, they’ve filled up with sediment and nutrients,” he explained.

Now, many such reservoirs are reaching a sort of critical maturity in unison—and the results of this synchronous aging, combined with increased pollution, are surfacing around the world. In Eurasia, South America, Australia, Africa, and North America, blue-green algae are thriving, turning clear water into sludge resembling pea soup.

“It certainly seems like we’re seeing more obnoxious algae blooms,” said Bill Taylor, a retired limnologist in Concord who has studied algal blooms around the country.

Taylor worked for years with the Metropolitan Water District, assisting the agency that provides water to Los Angeles in controlling algal blooms, which can impart foul odors and tastes to drinking water.

During the recent drought, when reservoirs were low and their water warm, the East Bay Municipal Utility District received several hundred reports per month of off-flavors and odors in tap water as a result of algal blooms, according to Andrea Pook, the senior public information representative for the district. She said East Bay MUD used a method of treating water with ozone gas to remove the odors.

The blooms also leave vast quantities of gunky biomass matted on a lake’s surface that, if the water is to be consumed, must be removed: a challenging task even for state-of-the-art treatment systems.

A potentially more serious problem is poisoning. Blue-green algae can produce compounds that chemically resemble snake venom and mushroom toxin. Horne said that in Brazil in 1996, several dozen people died after algal toxins contaminated the local drinking water supply. In the United States, there may be only one such fatality on record—a young boy in Wisconsin. More commonly, pets become ill or die after drinking water affected by blooms. There are no documented cases of people being sickened by harmful algal blooms in the East Bay, according to Casey Brierley, the East Bay Regional Park District’s integrated pest management specialist.

Brierley specializes in understanding how algal blooms work. The frequency of blooms, he said, “is starting to speed up. It could be due partly to warming, but mostly it’s pollution and sedimentation.”

He cites Lakes Temescal as a prime example of how an artificial lake has transformed over time into an environment where cyanobacteria thrive. Temescal, he said, was historically 60 feet deep in the late 1800s, when Temescal Creek was first dammed. Now, its average depth is about 12 feet. That means 48 vertical feet of nutrient-laden muck now lies just beneath the surface, providing blue-green algae with essential phosphorus well within the photic zone near the lake’s surface. “The shallower these lakes are, the more organisms can photosynthesize,” Brierley explained.

But cyanobacteria have an Achilles heel: The algae can only access phosphorus in water that has been depleted of oxygen. Such conditions trigger a chemical reaction by which phosphorus is liberated from the sediment and rises into the water column. Horne explained that water flowing into a lake, especially during high-flow winter months, is turbid and rich in oxygen. But late each spring in the Bay Area, such inflow often trickles to a stop, and as a lake’s oxygen levels decline through the summer and fall, the risk of algal blooms escalates, Horne said.

So, water managers are experimenting with a technique of enriching Lake Anza, which averages about 35 feet deep, with liquid oxygen. At Temescal, Brierley said, park officials have been treating the water with chemical compounds that bind with phosphorus and sink it to the bottom. The method has been marginally successful. A much more effective, but also more expensive method of dealing with cyanobacterial blooms, Brierley says, is dredging.

“Probably the only long-term solution is dredging,” Brierley said, explaining that scouring out decades’ worth of sediment rids the lake—at least for a while—of the nutrients that feed algal blooms.

Horne said the Romans described blue-green algae blooms in ancient England, and Taylor recalls as a child swimming in East Bay lakes that were in full bloom with cyanobacteria. Indeed, cyanobacteria—among the oldest organisms on the planet—are not likely going anywhere.

Harmful algal blooms are “a problem we’re going to have to learn to live with,” Brierley said. 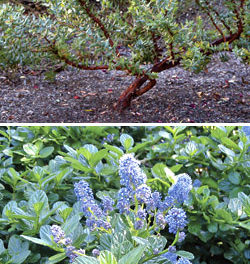 California Natives to the Rescue 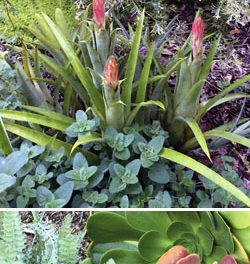 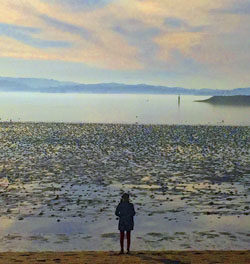 Parks May Get Financial Boost 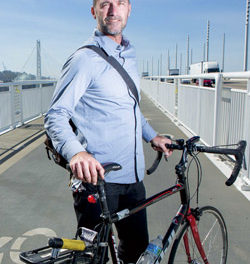 A (Road) Diet for the Future