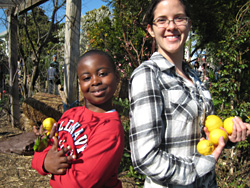 It’s a sunny day in May, and at Emerson Elementary School in the Temescal neighborhood of Oakland, students are outside with shovels, digging holes to plant mulberry and apricot trees, putting brightly painted signs labeled “blueberries,” “peas,” and “plums” in the ground, and enjoying lemonade and strawberries. Helping plant, and supervising the snacks are students from the Oakland campus of California College of the Arts (CCA), who worked closely with Michelle Beals’s fourth-grade class all semester as part of this Intercultural Garden Course.

One of the excited diggers, 9-year-old Deshawn Foreman, wears a T-shirt that says “I’m not a morning person.” But he is a garden person. “I liked that we got to plant things,” he says. “I liked shoveling dirt.” 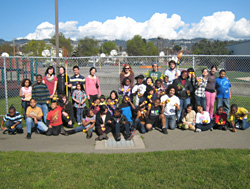 Green thumbs united: Fourth-graders from Emerson School in Oakland and California College of the Arts students pose with locally picked lemons in early March. The group has since planted an on-campus orchard just in front of the play structure at the upper left. Photo by Susanne Cockrell.

This class is one of 14 so far to take part in ENGAGE, a program of the Center for Public Art at California College of the Arts. Launched in spring 2010 as the heir to CCA’s similar Community Arts Program, ENGAGE provides a venue for arts students to use their expertise in real-world projects. (The program’s motto: “The Field as an Extension of the Studio.”) Entire classes partner with community organizations and outside experts in creative endeavors such as crafting ceramic nests for installation at Año Nuevo Island—the nests keep baby seabirds from being inadvertently crushed by sea lions. The program has also sent college students to work as part of a writing class with San Quentin prison inmates, to participate in the Zen Hospice Project in San Francisco, design art at San Francisco’s Lighthouse for the Blind and Visually Impaired, mentor students at Far West High School in Oakland, and more. In some cases—for example, with the Emerson students—ENGAGE also hosts visits to the California College of the Arts campuses in Oakland and San Francisco.

“It’s when you’re outside your comfort zone that you’re really creative,” says Sanjit Sethi, director of the Center for Art and Public Life, and an assistant professor at the college, who heads ENGAGE. In typical service learning programs, he says, students go out on their own and spend 10 hours or so a week volunteering at a nonprofit. ENGAGE, however, has a different model, one that encourages students to bring their art out of the protected classroom and into the real world.

“For college students, it’s uncomfortable working with blind people or working with people who are dying,” says Sethi, who traveled to India on a Fulbright Fellowship in 2003, where he worked on a project called Building Nomads, about migrant construction workers. “When you’re uncomfortable, you risk more.”

Even when they’re pushing their boundaries, though, the California College of the Arts kids don’t face the challenge alone. “A faculty member and the class work with a community partner to address a problem in a tangible way,” Sethi says. “They are all focused on one particular goal, not a student going off and having an individual experience, so it’s project-specific work with a sense of collaboration and community engagement.”

Amidst all the activity at Emerson, wearing a sun hat and a calm expression, stands Susanne Cockrell, a professor in the community arts program at the California College of the Arts. Years ago, she and her husband started Temescal Amity Works, a sort of low-key crop-sharing program in this part of Oakland, picking up donated excess fruit from people’s trees and pulling it around the neighborhood in a homemade cart, offering it free to whoever could use it. She liked the idea of creating an orchard at the school, in an area that used to have many.

“The climate here is perfect for growing food,” she says. “Fruit trees live much longer than we do, so we’re creating a long-term community. We’re really thinking about the garden as a social space.”

Exploring the neighborhood with their college mentors makes the fourth-graders’ world larger, Cockrell says. “We went on some walking field trips,” she recalls. “We visited a neighborhood backyard farm and the students picked lemons and made lemonade. They tasted mustard greens and herbs and spinach.”

Principal Caporicci is also a fan of outdoor learning. As a child, she loved spending summers with her San Juan Bautista relatives among their fruit orchards, she says, and was pleased to see the Emerson students getting a similar experience. But not quite as pleased as when they got to check out the college’s historic four-acre Oakland campus with its Arts and Crafts–inspired buildings and beautiful landscaping, not to mention a ceramics studio complete with pottery wheels, glazing lab, and kilns.

“The biggest thrill for them was working with college students,” she says. “There were no discipline problems when they were here.”

Beals, the fourth-grade teacher, also liked seeing her charges thinking about higher education. But benefits from the program were immediate. Many of the children in her class live in apartments, Beals says, so they don’t have much of a chance to get their hands dirty in a backyard. “We’re trying to build a whole child here, not just their English and math skills,” she says.

But Logan Greenwald, an easygoing, outdoor-loving photography student who took part in the ENGAGE course, says working in the garden even helps with math and science. “It’s hard to do weighing and fractions on the whiteboard,” she says. “Here you have a physical thing, like a piece of fruit. You can weigh it, and then take a bite out of it and weigh it again.”

Greenwald, who worked in nurseries all through high school, saw firsthand how the course opened the children’s eyes. “It shows them any space can be transformed. A month ago this was grass,” she says, gesturing owards the plants and fruit trees.

At the culminating event for the ENGAGE class with the Lighthouse for the Blind and Visually Impaired in San Francisco, Sethi looked pleased as he surveyed the light sculptures, interactive projects, and sound art the students created with the Lighthouse clients. The projects would become part of an installation in an empty lot near the Civic Center. Sethi pointed out that the students had to stretch themselves to design for people with visual challenges. An even bigger stretch, perhaps, was working at the Zen Hospice Project, where students made pillows that reflected their experiences of working with people at the end of their lives.

“There’s discomfort there,” says Lynda Grose, a California College of the Arts assistant professor of design, who says she sees a similar dynamic in her classes as well. “That’s where the transformation happens. If you’re working in a comfort zone, the results are predictable, but outside the comfort zone, you can have an aha moment that shows itself in the work.”

This past semester Grose—who the London Financial Times once described as a “green power broker”—co-taught a course titled Local Fiber Incubator at the San Francisco campus. Conducting field interviews, students got to know the farmers and ranchers who were their partners at Windrush Farms in Sonoma and through the Sustainable Cotton Project in Merced, and used wool and cotton fiber from those sources in several arts projects. On the final day of the class, the students showed off what they had created, including yarns, jewelry, books, and home furnishings.

Grose, who just co-authored a book about sustainable fashion design, says that students gain insight by leaving the confines of the classroom and their computer screens. “What I think is valuable about ENGAGE classes in particular is that they move students quickly out of the head into practice, and from preconceived notions into reality,” says Grose. “They had to work with the partners, and as in any partnership in real life, you have to be really flexible and adaptable.”

Lauren Elder, an adjunct professor of diversity studies at California College of the Arts, has seen similar transformations during projects she’s done at Far West High School and elsewhere with ENGAGE students and their Community Arts Program precursors.

Such collaborations are “good for CCA students because it introduces them to a whole other world,” Elder says. For example, she says, “The kids at Far West are super smart. They have street smarts. [They] can be outspoken and verbal and uninhibited, while kids at CCA tend to be art-school cool.”

When young artists see how their skills can apply in the real world, they become more confident and focused, Elder says. Her students who worked on an ENGAGE project at Mission High School in San Francisco last year were delighted to find themselves crafting usable furniture, building a real solar car, and painting garden murals.

For Tonia Herrero, a student of Elder’s in 2005, a Community Arts Program project helping Far West teenagers organize a fashion show changed her life. Herrero enjoyed the experience so much that she went on to obtain her teaching credential and is now employed as the fine arts teacher at Far West, where she has launched a fashion program.

“I knew I was interested in teaching, but I didn’t really know much about it,” Herrero says. “Because of that class, I realized what I wanted to do with my art.”

Sethi says stories like this make his job satisfying. “ENGAGE really harnesses the creative energy that exists in the CCA community,” he says. “We have dedicated students who want to see how their education can transform the world and themselves. This is a conduit for their energies.”

Back in the garden at Emerson, 9-year-old Debari Augustine may not know about conduits and transformation—but he knows the college students are “really great and helpful.” Sipping lemonade and eating strawberries, he talks about his perspective on the course.

“When you garden, you don’t have to be afraid to get your hands dirty,” he says. “And with gardening, you get to help the community. Say somebody didn’t have any food. We could pick some and give it to them.” 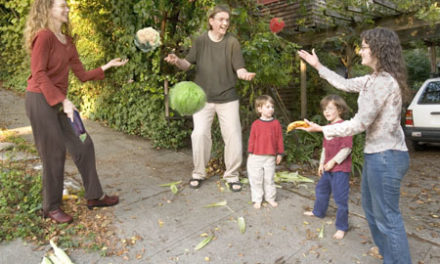 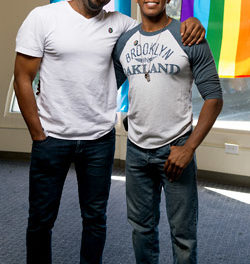 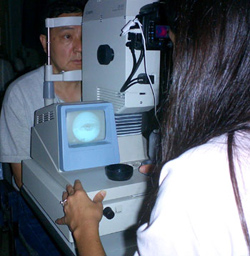 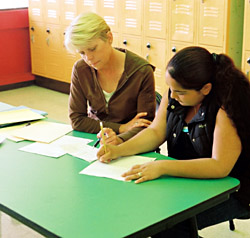