By Day with Rocky Becker

Over the course of 50 years cutting hair in the East Bay, Rocky Becker has developed a keen eye for baloney, and an opinion about pretty much everything this side of the bridge. For the past 18 years, Becker, a 72-year-old father of nine, has had a chair at Montclair Barber Shop, an Oakland institution dating back to the 1970s, complete with striped barber pole and a display of magazines like Maxim and Playboy. You’ll find him there every day of the week, giving good simple haircuts ($18, with or without spray) and good conversation. Between cuts, Becker, who sports a slicked-back, greaser style, patrols the sidewalk in front of the shop, smoking his Lucky Strikes and observing Mountain Boulevard in his leather jacket, black jeans, and dark sunglasses.

State of Montclair:
Well, it seems like there’s a lot of businesses being forced out because of landlords raising their rates . . . and those businesses are sitting empty for two, three years at a time. I’d like to see a nice men’s clothing store up here, and preferably a nice sports bar besides Crogan’s. Crogan’s gets pretty packed.

Barbershop bars:
California won’t go for it. They won’t allow it. A lot of drunk haircutters—it wouldn’t work.

Mohawk requests:
We don’t get too many of those anymore. We get a lot of fade work done; short on the bottom, faded up. And a lot of traditional cuts, and a lot of long hair. I pretty much go with whatever.

Celebrity client:
In 1962, [Al Davis] was coming up here, negotiating a deal to coach the Raiders. The guy before him had a record of two wins and 10 losses. And the first year Al took over, they had 10 wins and two losses. Three years after he became the coach, he wound up owning the team. We talked about all the wins and the losses and the players and, you know. The three Super Bowls were his best, I think. And I think one of the things he was proudest of was when he got elected into the Hall of Fame, being the maverick that he was, doing things his way. He did everything that the NFL wanted to do, but he beat ’em to it. He had the first black coach, the first Hispanic coach, the first female chief executive officer.

Fate of Oakland:
Well, it can’t go any worse, so it’s got to get better. Especially in the east part of Oakland . . . and the west part. All these shooting crimes; they’ve got to sort all of that out, and then the rest of the city will pick up on it. I think it’s lack of jobs, and I think it’s too much in the way of drugs being dealt around. If they would push the politicians and get them to back off on some things and focus on others, like fixing the school board, it’d help. If you want to fix the economy, people need to be able to have an education.

For a good time:
Well, we have a really nice lake down there; it’s too bad we have a lot of muggings. We’ve got some beautiful buildings and we’ve got some beautiful areas in town. Montclair, Glenview are both really nice. But we’ve got a lot of break-ins up here. I like Everett and Jones down at Jack London Square, where you can sit outside and have dinner or have a nice afternoon. El Agavero here, the Mexican restaurant, is very nice.

Influx of hipsters:
It brings young blood up here [to Montclair]. The old people pass away, and the kids take over and they raise their kids here. And I still think it’s a good environment for kids. It’s still a pretty safe environment, basically.

Motorcycles:
I have an ’80 Sturgis and a ’93 Low Rider. I usually get to take those out on a Sunday afternoon because I work six-and-a-half days a week. A lot of my friends are people I grew up with, like Sonny Barger from the Hells Angels. I’ve known him for many, many, many years. A lot of members there are friends of mine.

Guns:
You should be able to carry like a .38 or 9-millimeter or a .44-, .45-caliber for person-al protection. I have a T-shirt that says, “Cut the scales of justice.” And on one side there’s a gun with a smokin’ barrel, and on the other side there’s a pile of dirt with a tombstone. The caption says, “I’d rather be judged by 12 than carried by 6.”

Hunter S. Thompson:
I met him once. He was a pretty far-out guy. I know he got his tail kicked. 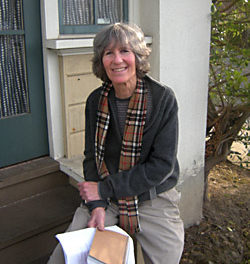 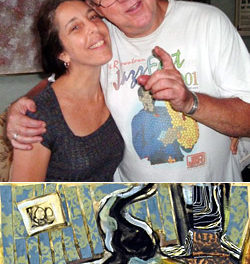 By Day with Jane Oriel